The electoral campaign of 2015 in Venezuela will make it to the text books of electoral infamy. To find worst campaigning conditions you need to look into outright dictatorships of the communist type. These try to pretend that everybody gets along while folks are forced to vote for the one party state. In fascism they do not even bother with appearances which, in a way, is a tad more honest.

But the bolivarian farce came to power through honest elections and it must retain power through elections, no matter how rigged those are. There must be an appearance that there is an electoral contest. That is why opposition public meetings are still authorized, even though shot down as necessary least they become too large.

Recapping all the electoral treachery is too long for this blog. Besides, the OAS General Secretary has done a magnificent job out of it, through an 18 pages letter to the Venezuelan Electoral board, CNE. Let's just say that you can find it all, from gerrymandering, to funding abuse and even false electoral propaganda of political parties using opposition candidates to promote their own ones, going as far as finding perfectly unknown assholes that happen to have the same name as the opposition candidate. In other places the amount of political posters of unknown parties dwarfs the posters of the PSUV or opposition candidates in numbers and size (see below). We all know of course that the regime itself is financing these efforts trying to pry away vote by vote from the opposition electorate. They have no sense of ridicule.


But when all is said and done, that excess of cheating is nothing new, it has been tried everywhere else although not to that extent in Venezuela, and in the end may turn out to be counterproductive. The strongest electoral campaign will always flounder when the voter has no food nor medicine for its kids. Polls in a rare unanimity give the opposition at the very least 15 points ahead of the regime.

Yet, what will make this electoral campaign truly memorable is that it illustrated in the most cruel fashion the vileness that chavismo has descended into. I, for one, am completely bemused that there are people with some democratic inkling that could support a regime campaigning in such extreme ways. There is a simple explanation, chavismo has stopped long ago being a democratic movement, If it ever was one. From political prisoners, to the insults uttered against opposition respectability, reaching actually shootings of opposition rallies, for that you need to go to Myanmar or the like for comparison. With the provision that Myanmar is actually improving while we may still become a gulag civil war country.

The international outrage has been such that you can only find minimum lip service support for the regime in a scarce number of countries. The democratic countries? None supports the regime anymore. In fact, for the first time, there is actually a country ready not to recognize the Venezuelan election if on Sunday it sees worse than what it has been so far. And that country, Argentina, may be what many other countries are waiting for as the excuse to agree that Venezuela's regime is beyond the pale.

So there you have, a campaign for the history books.
--------------------------------
I have not seen such a concentration of posters for any candidate, PSUV or MUD like the ones you see below for the disgraceful William Ojeda. He claims to be a moderate thinking opposition but he is also the PSUV candidate. Yet, you would be hard pressed to find a single PSUV poster anywhere with Ojeda... 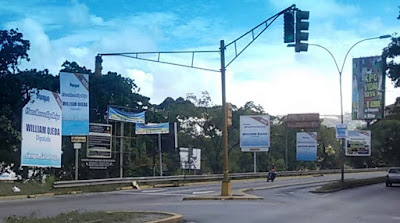