And they shall go to jail

I am not sure if people outside Venezuela truly measure how miserable it is to live here. However one thing is certain, the political situation makes it impossible for things to improve any time soon. Even more certain are the odds of things getting worse. The photo below is National Assembly chair Ramos Allup showing on TV the picture of the defense minister Padrino Lopez in bowed deference to Fidel. This is the clearest sign that the confrontation with the regime is reaching pitch fork level. 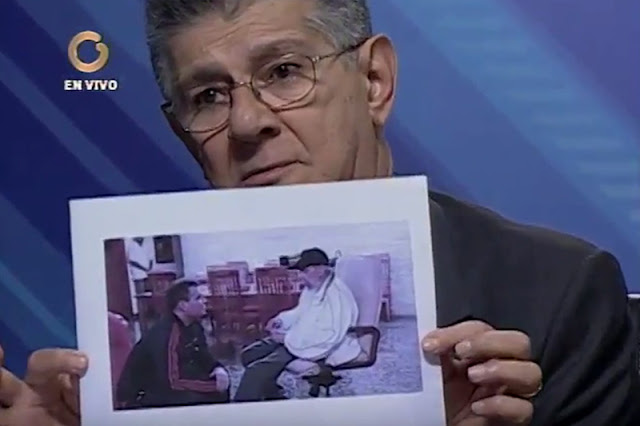 Why is this picture, which has widely circulated in the web months ago, back in front?

For this you need to come back to what this blog has gotten tired to repeat over and over: the regime cannot, CANNOT, leave office because this would mean that dozens if not hundreds of regime luminaries will find their way to trials and jail sentences, some as far as reaching The Hague tribunal (it is my opinion that, at the very least, Maduro's criminal actions against the well being of the Venezuelan population make him worthy of sitting at the accused bench of The Hague international court for human rights).

If you do not get this, or disagree with this, then you really have wasted your time reading this blog over the years.

The Games of Thrones played in real life here is as confusing as the fictional one, and probably many a political career would be demised as in the series, hopefully with not as much blood though I am now certain that some will be spilled..

To try to understand this let's start by the game played by the National Assembly. It's only weapon is legality, voting laws that bring answers to the plight of people. The process is long and tedious and exasperating not only to the radical minds inside the opposition but even to more rational spirits like a dear friend from overseas with whom I had a long talk yesterday.  It is indeed hard to keep cool in front of the onslaught suffered by the Assembly.

The regime indeed is annulling every law the Assembly passes. Even if the political cost for the regime may be high. For example we are waiting for the oncoming, announced, annulment of two laws. One is designed to allow quick and full ownership to those who got public housing in recent years. This is a No-No for the regime as that housing is sort of a grant that people can preserve as long as they support the regime. But denying such law goes against the human nature of even many hard core chavistas who, well, like any human being want their very own refuge...

More damaging still are the ridiculous pretension that the "bono alimentación" (kind of a food stamp system) for retired people is too expensive for the regime to accept. To which it was replied immediately that if there is money for weapons then there is money to help retirees living of a pension that is today at 40 USD a month (according to DICOM already in free fall since its creation weeks ago). The problem here is that the regime cannot permit under any circumstances to have the populace believe that they can get stuff outside of Chavez or his appointed heir. I suppose that in the regime mental construct the political price to screw the elderly is preferable to the political price of people starting to think that there is life after chavismo.

I pass on other laws annulled which are more abstract to the point made here. The objective of the regime is to annul the National Assembly. Since this cannot be done easily in front of the public opinion, and because the Assembly has two atomic bombs in reserve, the regime is proceeding to discuss nincompoopy proposals such as an amendment to bring down the Assembly term from 5 years to 60 days. Amen that such a constitutional amendement would have to be voted in a referendum (article 341) that the regime cannot win without massive and thus obvious fraud.

Or go the way of a mere coup and that is that.

Indeed the National Assembly has two bombs that are very dangerous to all, but more to the regime. One is the ability to call for a Constituent Assembly that if it proves effective could result in sweeping away all of the regime office holders (articles 348 and 349).

The other bomb is immediate: the regime is short on cash and the only way to borrow more dollars is to get a favorable vote from the Assembly (as a guarantee to the lender). This one will certainly give it IF AND ONLY IF the regime accounts for how the loan will be spent, monitored through a mechanism that will not be under regime control. Something that is totally unacceptable for an hyper corrupt regime. Will the regime pick bankruptcy? Coup? Negotiation?

I am going for coup even though no one will lend a dollar to the regime in such conditions. A coup would only result in utter misery for the people with the regime's hope to control the populace through control of food. A gamble that at least Maduro, Cabello and their close corrupt entourage are willing to take with the assumption that the army will help killing whatever needs to be killed through heavy repression.

Which brings us to the picture opening this entry.

I, for one, consider that Ramos Allup and the opposition have acted to the best of their abilities. There may be better ways to proceed but NO ONE so far as made the case that there is another strategy for the opposition to corner the regime until this one blows a fuse and close the Assembly, or collapses. Either way, many will have to go to jail...

The pressure over the regime has been gradual but continued and unfaltering. And at each time the regime has shown its dark nature. First the emergency economic decree was rejected but approved through yet another judicial coup. The the courts decided that the National Assembly did not have the right to call for hearings on public servants unless allowed by the regime. Then populists reforms are rejected at political cost for the regime. Then the amnesty Law is now under threat and if the regime rejects it it will result in a strongly welded opposition against the regime. On this last one we had the Defense Minister that chimed in as to his opinion that the Amnesty Law was bad. Not only this is not true, and not of his resort, but coming from someone who is linked to coup mongers that benefited in their time from an amnesty of sorts it is simply an indefensible position.

Ramos Allup thought that the time has come to put the armed forces in front of their duty. Showing the picture of an adoring minister of defense in front of a foreign potentate, publicly, on TV, simply questions the loyalty to the nation, to democracy, of the head of the armed forces.

The implications of this are so obvious that I will dispense the patient but smart reader from further explanations.

Only one comment to close this entry: Padrino Lopez today must regret not to have accepted the massive fraud that Cabello wanted to perpetrate on December 6. I will let you think on that too.