Tales from the breadlines


There are breadlines everyday in front of the bakeries that will be making bread. Not all do, some because they cannot deal with the mess and others because, well, they have no flour. The lines start forming around 11 AM or 5 PM. That is that.

The other day I was in El Recreo district and stuck in traffic I watched what is a short line. Yes, a short breadline. I have seen some that are 3, 4, 6 times as long as the one you can see in this Instagram video I posted. Being bored I did make a croquis of that line, to locate the picture below. 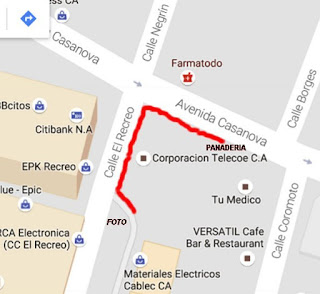 On other news, a tale from my cleaning lady.

Now she needs to go a get a number the day before her appointed day for shopping (note: for certain items you can only shop on the day that corresponds to your last number of your ID card). That line to get the number by itself lasts a couple of hours, at least, if you want to be sure to get a number. And then you still need to go early next day and do, at least, another couple of hours standing in line if you want to make sure supplies are not exhausted before your turn comes.

This is already bad enough but it gets worse. See, while they are in line people chat, get comfy, start exchanging phone numbers so they can text each other when things arrive. So far so good. But the bachaqueros, those people making a living out of buying and reselling what they get in line, have noticed. So they play the friendly game without passing for bachaqueros and THEN, when they happen to not get as many number line as they wished for, they start calling people and threaten them if they refuse to give up the number they got.

In other words, within the long line there is a now a surveillance network of bachaqueros that notice who are the weak links and when they do get a number. Then, voila, extortion on those poor friendly souls.

Added in proof: I just learned that the regime is now threatening to close/fine the bakeries that have lines outside. Apparently Maduro says that there is enough flour and that the bakers, in a giant conspiracy I suppose, want to force people in line to give bad propaganda to the regime.

Now I can die, I have seen it all.