Now that we have a novel National Assembly, who is speaking for chavismo? (1)

One "surprise" is that Jorge Rodriguez is the new chair of the nNA. Well, not that much of a surprise since he was sent to run while he was occupying high positions inside the chavista nomenklatura. He has been mentioned enough in this blog so I will not review his extended life serving chavismo. From an alleged impartial electoral umpire in the early 2000 elections he ended up as Vice President of Chavez in the many positions he occupied. He, and his sister currently the vice president (2), are now the main operators of Maduro, sort of representing the civilian side of chavismo.

Does that mean J.R. has his own power base, as many observers think? Not at all for me. That JR is put forward means that Maduro has more power than before and uses JR to further his agenda. For all their skills the evil Rodriguez siblings have no real political base they can call their own. They are the civilian image of the regime, those that are sent for negotiations and the like where you need people that know how to behave, holding a minimum of general education (3).

Yet JR appointment meant Diosdado Cabello was apparently relegated to majority whip when all expected him to recover the chair he lost in 2015. Does it mean Diosdado star is fading? Probably some but not that much. First, he retains influence within the army. Second he is the manager of the chavista party, PSUV. Third, he represents quite a sector of nouveau riche originating from corruption. And fourth, if drug trafficking has direct influence in the power structure, he would be one of their voices. Dismissing Cabello is way too early. A regime in search of oxygen cannot promote Cabello who has opposed and sabotaged any velleity of negotiation.

When we ponder the fate of Diosdado we cannot forget that chavismo has a leninist, communist party structure and management. Those who survived or grew in it for the past 20 years know that and obey without fault. Yes, there are leaks. Yes there is infighting. But they are kept at a minimum and when election time comes the candidates are decided way up and all rally behind them. This structure is also necessary for survival when you have become a gang of looting politicians and narcotraffickers. The dreaded domino effect if one side were to fall guarantees that all sides will keep parcels of power as long as in the end all agree and support the front formula.  Thus we can even consider that the "demotion" to majority whip is in fact a tactical move as Diosdado is an unpresentable leader for a regime in need of some type of facelift for future necessary negotiations. Diosdado cannot go and meet US or EU delegations, JR can, still. 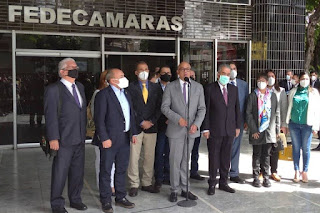 We can thus understand one of the latest moves of the regime sending JR to meet Fedecamaras and ask them for help to deal with the Covid19 crisis. We get pictures that we would have never expected: the regime going to the seat of the private enterprise organization for talks. For one reason JR was not in the forefront of the disastrous political conditions used to manage the economy; he may have supported the massive expropriations for example but it was not on his visiting card. Certainly Fedecamaras, the culprit of all evils in chavista lore, was more embarrassed than pleased by that visit. But since private enterprise is on survival mode if the regime is willing to offer some oxygen, why not "welcome" them...  yet the regime cannot help but be itself and kill on one hand what it seems to offer on the other. Of that meeting a result was to create yet another subcommission which includes "nicolasito", the son of Maduro himself. Of his educational background we know little, of his economic skills less, but we already know quite a lot about his shady financial deals.

We do not know whether the regime is preparing in nicolasito the successor of Maduro. It should have been from the Chavez family following a certain East Asian country script; but the Chavez family is quietly enjoying their loot share and has been exceedingly discreet. We thus have a modified set of actors.

Maduro is the front man, tightly monitored by his wife, Cilia Flores.  Over time his own political base within the party must have grown some, but it certainly is not very large: the PSUV can make and read polls and Maduro is nearly universally rejected. But Maduro is there, the direct proconsul of Cuba, the front man, the image of regime "stability". That is his real share of power.

A slice of Maduro power is the Rodriguez siblings. They are convenient operators, used by any faction of the regime, as needed. Their power originates in that they are the only civilians that have an idea on how the outside world function even if their judgement is clouded by ideology and resentment.

Diosdado Cabello has been losing ground. First inside the army as the people he helped and promoted are going into retirement by law. Nobody knows for sure how influent he is in the new classes. But Diosdado has real following inside chavismo for his vulgar but popular bluntness. He is the only one who still has on TV a popular show that destroys anything it decides to destroy. He also used to be the representative of sorts of the "derecha endogena", endogenous right wing, which was the people that gained immense wealth out of corruption, against the commie ideals of the bolivarian revolution. It seems that part of that support has moved towards Maduro or the army as in an era of less cash the army is less inclined to share.

The army has managed to retain Padrino way past his retirement age. He seems to have become the inamovible defense minister, a position that is held on a rotation basis among army higher officers on an annual basis. He has been there for years now to everyone's surprise. But how strong is his power share. Is he really the one holding the army together? Does it control it as we know that the feared Cuban surveillance skills know whatever happens in side and snuff fast any remote possibility of conspiracy? Or is he just the face of the army now become a shady business center? Whatever it is the army through its repressive branches are the ones who still make possible the regime and thus must be counted as an extended support for Maduro. Not Maduro's power as he must respond to the army, but as what justifies his hold on office.

But there is another power that does not have a visible face: rampant crime, militia and colectivos. Crime has become one of the pillars of the regime for the single reason of symbiosis. The regime has lost the will and capacity to control crime. Consequently crime runs rampant in some areas where the regime has given up any pretense of control. We thus have now mini states were gang organizations are the true rulers. Nobody enters without reasons, even less the armed forces though on occasion we do have major warfare between state security and gangs. But the gangs that collaborate politically with the regime and do not go too far in their criminal activities remain safe in their strongholds. Feudalism of the XXI century....

Colectivos are an elaborated example of these new structures, powerful enough to operate free rein, but not enough to impose their will outside of their areas of competence, so to speak. I already wrote a post on them in 2014. Since then they have prospered further and became actual parcels of power for secondary regime characters like Bernal who for the time being is behind Diosdado. But his influence/control on some colectivos make him someone who on his own right cannot be ignored.

We can end this with Iris Varela who has been sent from years as minister of jails to second vice president of the nNA. She is famous for her selfies with notorious criminals and for not solving the overcrowding and other jail problems. But she is also suspected of having deliberately allowed for the transformation of certain jails in yet another kind of feudal grants. Some jails are famous for organizing all sorts of traffick, from kidnapping and ransom to open road hijacks of food trucks for resale, sometimes at the very door of the jail. Why has she been transferred is perhaps the lone surprise in leadership moves. Has the gang system reached such might tha they decided to have their own seat at the big table? Did she get tired? Fired? Is she the radical caution for a regime going back to wild capitalism and negotiations?

There has been no face lift of chavismo, just some slight shifts which are expected to fool future negotiators. Yet, there is a sense that something may be going on. After the purges of the old chavista guard maybe new purges are in the horizon.

1) I use the novel adjective for National Assembly because it is illegitimate and it is not recognized by democratic countrie;s and yet there we are.

2) Remember that vice president in Venezuela is by appointment, with heavy rotation and as such is just the principal minister.

3) The Rodriguez siblings are the children of a leftist guerrilla that was killed in detention. They consider that justice was never fully done and that became their life obsession, to avenge their father. They have been on revenge mode ever since and nothing ever will satisfy them. Yet among chavismo they are among the few, he at least as a psychiatrist, who have some reasonable level of cultural education. I personally consider him as a psychopath and she as a sociopath. And I have talked about them with shrinks reaching the same diagnostic....