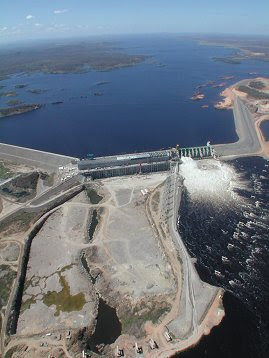 Last Friday Hugo Chavez, president of the Bolivarian Republic of Venezuela inaugurated the first “great” project that reaches conclusion during his tenure (1). In fact, many of these projects might reach conclusion, coincidentally (?) in an electoral year, though NONE was started under his tenure. They will be timely to shore up a regime that in 7 years can only show a constitution (already badly violated) and a few social programs (some of dubious value and none with true accounting or real assessment of their results). The inauguration “scene” of the project and its nature are a good opportunity to reflect on what a state project is and how people try to manipulate the interpretation of such “achievements”.

Venezuela is not only the owner of some of the largest oil reserves in the world, but it has enough geological accidents that it can produce all the hydroelectric energy it presently needs and then some more. This allows Venezuela to export more oil as it does not need to burn it all for energy, and it also allows for cheap electricity and its wasteful use. Heat seared Maracaibo for example is the coldest city in Venezuela due to its abusive use of AC. Shopping malls elsewhere have no problem in keeping their doors open in a vain attempt at cooling the atmosphere…

The center piece of this energy making is the lower basin of the Caroní river. This river does benefit of a large volume of water all year round, and meets the Orinoco in a brutal descent over its last 100 miles from the Guiana Highlands. Perfect conditions to install what will be perhaps the greatest hydroelectric system in the world once all is completed. This would require the construction of several dams upstream in a wilderness that has only allowed so far the recognition of potential, but meanwhile the lower course will be dotted by 4 major complexes which by themselves are a sight to behold (very large PDF file here by the CVG, the state organization in charge).

It all started in the 1940 ies when the Guiana wilderness was studied and a project generated. Then Venezuela was barely starting to modernize and on paper it probably looked like a pipe dream for an area that meagerly lived on some jungle exploitation, distant cattle grazing and little bit of iron and gold mining. Still, in the 50ies the current dictator, Perez Jimenez, started by the simplest of the projects, the Macagua I dam. The simplest because it relied on the volume of Caroní waters to activate its turbines. No major public work required for a conventional dam. Yet, Macagua generated enough electricity that it gave a fast start to the development of San Felix, soon to become Puerto Ordaz, the heavy industrial area of Venezuela. For that the Cerro Bolivar was consciously razed of all of its fabulous ore deposits while Sidor on the Orinoco edge melted and treated all the ore it could manage. Courtesy of electricity.

This “progress” allowed for the fast settlement of the area and thus the existence of the necessary manpower to built the largest all the projects: the Guri dam. If Macagua was within a few minutes drive from the Orinoco shores, Guri was in the middle of nowhere, a hundred or so miles upstream. They had to start by building a road as the rapids of the Caroní made impossible fluvial shipping of the goods.

As a kid I remember the heroic years of the Guri construction, a national project of glory as we never had before, erasing in the collective the already significant projects of Perez Jimenez. There was even a field trip during high school where we all watched in utter amazement as the mighty Caroní waters that came from the overflow of the dam crashed from 120 meters to bounce back up half the height of the dam (very short video here). But we also remember that from one side of the lake we could not see the other side. When the final extension was covered, the Guri lake covered an area larger than the state of and could be clearly seen form Space. Guri lake when full would cover Rhode Island or Carabobo states. Besides being a touristic choice destination (in English here).

Guri was the center piece because it regulated the flow of the Caroní and allowed for the construction of the rest of the dams that now did not require a large reservoir to function: their smaller reservoir would always be filled regularly by the mother reservoir of Guri, any hydrologist dream. Thus followed the construction of Macagua II and Macagua III and the final inauguration that interests us today, Caruachi (2). Not forgetting the expansion of Guri itself to its present colossal size. All of these today generate 75% of electricity consumption of Venezuela and allow for direct electrical exports to Colombia and Brazil. In about 6 years the last of the four dams, Tocoma, will be completed. 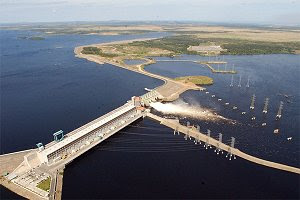 Now that we have put some perspective on the importance of Caruachi in the biggest Venezuelan state project through every government since 1950, we can look at what has Chavez done about it. Certainly, all governments have been found to inaugurate this or that on the Caroní or Puerto Ordaz area, even if it had been started before their term of office. But Chavez has definitely pushed the envelope.

To be fair, he has not tried to change the project like he tried to change many of the other projects planned before his arrival at Miraflores Palace. One particularly biting fiasco was when his underlings tried to stop the construction of the line #4 of Caracas subway to replace it by a trolley. They were laughed out of it when it was pointed out that the trolleys would be stuck in traffic and useless. So the work on the subway line grudgingly restarted when the French financers pointed out that further delay would dramatically increase the financing costs. This did not stop chavismo to try to place trolleys elsewhere, a technology of the past only valid today in small towns. Nevertheless chavismo is pushing it in congested Merida and large Barquisimeto that should be already considering a subway system. But I digress.

The more likely reason why Chavez did not change the Caruachi project was the international financing already involved (about a third) and because, well, the project was already well advanced and there is only so many ways you can build a dam and its reservoir. Thus Chavez did the next best thing: anytime he could make a stop at Caruachi to inaugurated a turbine or some earthen work, there he was to make a big speech. Last Friday was the final inauguration as the two last turbines were activated. The first thing that Chavez did was to give Caruachi a name. Fortunately he chose to honor Miranda, a name that we can all agree on even if Miranda never set foot in Guyana (3).

I must say that Chavez did try to set it as a state event. But when all was set up he could not resist and his mean and resentful nature took over in these words:


“The Punto Fijo pact [1958-1998], we must recognize that with all the disasters that happened then, they gave continuity to the Project [the development of the lower Caroní] (4)”

Does he realize that future historians might say EXACTLY the same thing about his administration? Or does he think about his tenure as “the thousand years Reich”? This was accompanied by a blatant lie. He claimed that his administration had come right on time to stop the savage neo liberal privatization of the Caroní project. First, dams cannot be privatized, in particular of the size of the Guri one. Who could afford that and for what? To shut it down if they go off on vacation? Only the distribution of electricity was under study for privatization. But I am sure that the peanut gallery will gobble that new rewriting of history.

But that was not all, he dedicated the new dam to the benefit of all of Latin America and the Caribbean (underwater high tension lines?). So, are we now to become the providers of all of LatAm energy on the cheap? Chavez has reached a new dimension in gift giving of what is not his. And of course without anyone, certainly from within his sycophantic following, to point the idiocy. I do not know about you, but as a tax payer that last Tuesday had to pay the equivalent of 15 days income in taxes I am getting tired of that megalomaniacal Chavez ritornello. Chavez has in fact achieved the privatization of the lower Guri project: it is his to do as he pleases.

All of this made me wonder again at what are called state policies, policies that are so important for a state, be it on defense or economical development that all parties agree and that they are reached through some form of consensus. Chavez seems to be doing away with it, and happily at that. The consequences will be nefarious for the long term development of the country as more and more projects will be devised according to the will of Chavez rather than the real interests of Venezuela. One example comes to mind, the Apure-Orinoco axis, which Chavez keeps harping on but which fortunately is not starting as no one wants to go and live there (as a side comment, documents that treat the topic are a rich source of bolivarian lingo for those that can stomach such language, as shown in this example).

Thus the inauguration of Caruachi that could have been a great event in Venezuela, where Chavez could have invited, e.g., ex president Caldera to attend, has just become yet another self promotion moment, an electoral event in bad taste, with cadena included, a wasted opportunity to bring the country together.

But Chavez is a petty man and I suppose he cannot help himself.

1) By Great projects I understand flashy public works construction such as the second Orinoco bridge or the railways under work. There was some important construction completed in the oil sector for example, but those are of a different nature and not as “vote getters” as some nice concrete feature in the landscape.

2) The picture above of Caruachi under construction comes from here.

3) Caruachi has not been exempt of environmental conflict that Chavez, curiously, was prompt in glossing over. Autocrats never let themselves be bothered by ecologists.

4) It is to be noted that none of these words were reported by the state news agency I consulted (RNV, ABN, MINCI, Aporea). I suspect that his public image managers realized how lousy was their boss posture and "ignored" the words. Fortunately there is enough free media left to catch the stupidities constantly uttered by Chavez.
Posted by Daniel at 3:13 AM