Avalancha Tricolor: the photo report of Venezuela's biggest meeting ever

Today started with the scandalous announcement that basically all the access roads to Caracas were semi blocked. That is, after years of neglect, suddenly the government decided to clean up the highways. Even someone at the CNE felt compelled to express disapproval. But of course no one is holding his/her breath waiting for sanctions. In the end it did not matter at all, many made it albeit late, but Caracas by itself was enough to fill up the streets, and boy, did it do so. Preliminary reports claim that up to 1.4 million did participate. I do not know about that, but I have been to enough marches in my life and that one was the biggest one EVER!!!! Bigger that the NOW marches on Washington Mall that I attended and where I saw people which then was rated at near a million (2 decades ago or something). Bigger than the one in October 10 2002 which was the first time that 1 million people were documented in the streets and probably the record holder of Venezuela until today. Today was the largest march/rally ever, and probably the last one. If Chavez loses on December 3, there will not be as much incentive. If Chavez win, he will make sure that such a slap never happens to him again.

Now, my own story of the day. There is a total of 14 pictures that range from panoramic to a street scene such as the people waiting sleeping on card boards in front of the ministry of habitat, in the vain hope to get a home before December 3. Click to enlarge. Enjoy!

This first picture is taken from the bridge that connects Chacao to Prados del Este. It is the back stage, about TWO hours before Rosales was to arrive. The blue arrows indicate from left to right the people waiting densely over the Rio de Janeiro to the contact bridge and how far on the upper floor of the highway people were already packing. 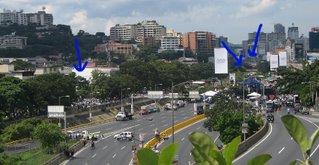 This next picture is the back stage and you can already appreciate how packed the highway already was. I was still one hour away on foot! I was going to try to join the crowd after the darkest building were the folks coming from Easter Caracas could join in. The people from the West areas arrived directly through the highway from Plaza Venezuela. I was told that at the climax the people reached as far as Plaza Venezuela, but I would like to see those pictures. 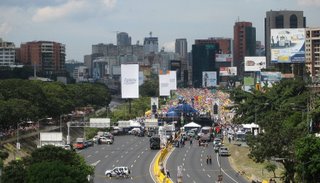 This is on the way. We walked taking over half of the main street of El Rosal. 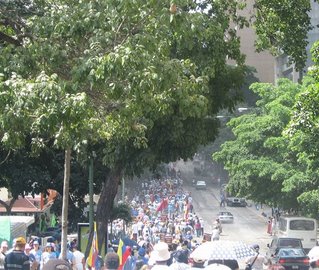 At some point we walked in front of the folks that are camping out in front of the Habitat Ministry. You an observe clearly the cardboards they sleep on, the way they hold their stuff on the tree, waiting patiently TO BE THE FIRST IN LINE NEXT MONDAY!!!! Interestingly some were holding pro Chavez posters as we walked by. Maybe they still believe in Chavez in spite of spending a weekend on the open. Maybe they wanted to show their allegiance in front of the Nazional Guard on the other side of the street, to score brownie points. Perhaps I should have tried to talk with them but my party was advancing and I just felt too bad for them, at how humiliated they must have felt in their predicament. 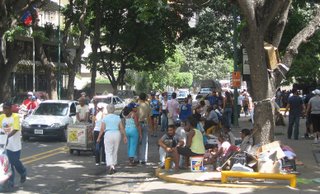 Under this bridge was the arrival of the march from Prados del Este and Bello Monte. Look at the density of the people coming up, while the highway is already packed solid! 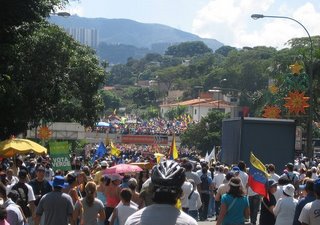 And we arrived, but of course we could not any further. You can see the two levels of the highway full of people. 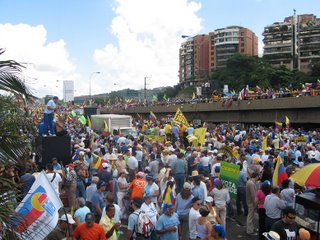 Picture towards the Plaza Venezuela. About a couple hundred yards from the picture that I took in 2003 and that is still on the right side of this blog! You can appreciate how far the crowd was going on the upper level!!! 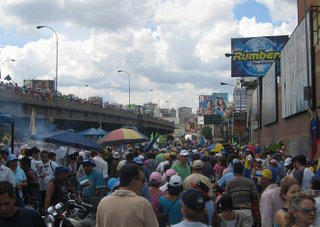 Finally sneaking inside the huddled massed I tried to take a picture toward the center stage. From where we were we could not see it and we just could not try to advance much more unless we were willing to fight our way through. 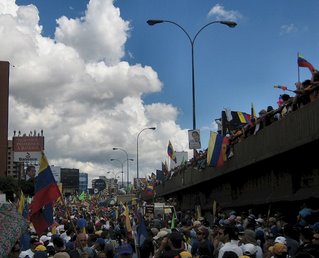 We left and I took this picture as we were leaving when for some reason all were waving the flag. Impressive.

On the way back we reached again the intersection shown earlier, now with less people. So I could try to get a closer look and I caught this great picture which combines an advertisement on Chavez as some great thinker while the words printed are utter inanity! Who comes up with such lousy promotions? But the picture works in so many levels. First there is already the huge crowd under his eyes that shows that after 8 years they still do not buy it, do not believe anything from him. And there is the Banesco sign, one of the banks that has obscenely benefited from all the financial manipulations of the regime. Fabulous! 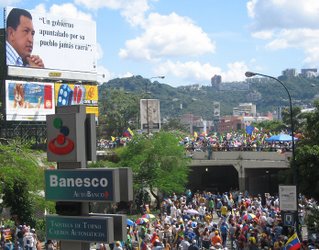 Eventually with sheer luck we managed to get inside a building that was under renovation (we followed one of the inhabitants after he opened the door and we managed to climb to the roof). This is also where I did the video shown in the previous post. Here you can observe the highway toward the West of Caracas. Where you are unable to see details was exactly where I was about 45 minutes ago in the pictures above. So you can see that THIS IS ONLY a portion of the rally, not to mention all the Rio de Janeiro full, all the El Rosal and Chacaito side roads full! 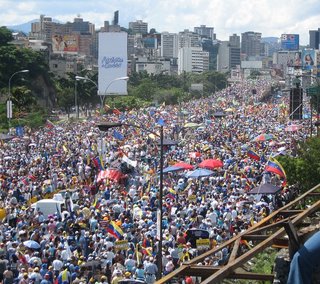 A close up. You can see the people packing the roads across the river. 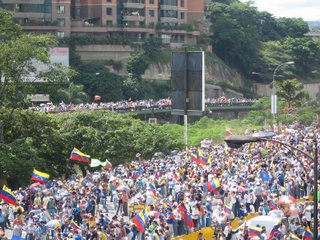 And now towards center stage. How many people in these three pictures above? 100 K? 200K? More? How much including what we cannot see? How much if we factor in those that might still be coming and those that left long ago? 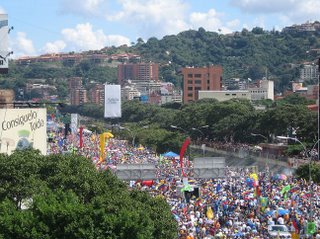 Finally, as I was coming back Rosales was finishing his speech and by chance we were walking by a side street with a view to the center stage. The blue arrow shows where Rosales was!! The second time I see the man live! 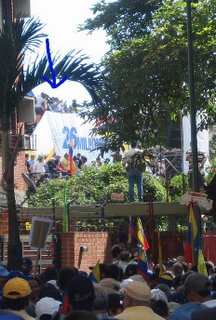 At least, in spite of the ridiculous polls published lately, it seems that this event has shocked a few of the international media. Here a few links in no particular order.

Globovision already notes the responses. Reuters in Spanish notes hundreds of thousands of people! It would be interesting to see how Reuters reconciles this event with unfavorable polls they reported. BBC in English also speaks of hundreds of thousands and gives a nice aerial view of the upper deck as people were arriving. It would get packed later. Unaccountably BBC in Spanish reports only tens of thousands. But at least it reports on the obstacles put on the way.

INFOBAE from Argentina reports the inaccurate and very tendencious EFE report who takes great care to point out that all meeting points were "en areas pudientes" implying that only rich people showed up. EFE has discredited itself log ago as being an almost all out supporter of Chavez but its stupidity this time deserves to be reported. If they are remotely right then there is a huge amount of rich people in Venezuela and they all oppose Chavez. Jerks!

FoxNews at least does consider the contradiction between the losing and depressed candidate that the AP-IPSOS poll would suggest with what it saw today in the streets. Something is not ringing true for some folks at least. The Washington Post does pick up the Reuters issue but in English. They do get the translation right and speak of hundreds of thousands. The Post also wonders about the polls.

Finally the Herald Tribune gets the AP report. They also mention the AP-IPSOS infamous poll but do mentuion the hundred of thousands too. Visibly, newswires will be doubled checked now by serious newspapers.

Alek did climb on top of an advertisment post that seems to have been a rather dangeorus undertaking. But he got great pictures. And his post, of course.

There you can find the pics of someone who did manage to get under the stage and saw Rosales speech.

I will gladly publish links to other people who have their pictures on the net.

Tags: rosales, chavez, elecciones3D
Posted by Daniel at 3:15 AM