A not too bad day for Chavez

Yesterday must have smarted quite a while on Chavez face. After 8 years of populism, threats, abuses, vote buying, Chavez realized that not only as many people as ever disliked him deeply, but that the relative calm that had installed itself in Venezuela after stealing the Recall Election was disrupting fast. Indeed, after years of the use of such devices as Tascon list, police and military brutality Chavez had all the right in the world to expect a more timorate campaign against him. But as the weeks went by he suddenly found himself with an unexpected challenge. Fortunately for him today he did get a break of sorts.

Chavez closes his campaign in Caracas

After Rosales rally yesterday it was Chavez turn to fill up the streets. It was not too bad though it was certainly not more than what Rosales got.

To begin with Chavez got lot of help. Hundreds and hundreds of buses streamed to Caracas 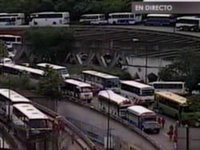 filled with people in red shirts. For them, even the toll booth stopped cashing the tolls. Buses were everywhere downtown Caracas. At some point I had to go to La Campina and at 2:30 PM, after the vent was done with, I still counted 41 buses parked around the PDVSA main building. My brother had to go to the Libertador avenue and told me there were too many to bother counting. I would like to see any picture of buses lining up like those yesterday. I did see two of them though, from a group of marchers from "El Placer". They were nicely parked at the CCCT. But I saw none in El Rosal and was told none were to be seen hidden somewhere in Las Mercedes.

Also public employees were forced to go. A relative of sorts working at the SENIAT told us that she had to be at the meeting point at 9 AM and that attendance would be taken. She also was told that attendance would be taken again, two hours later. So no escape for her. Note: at work they know she is not chavista but she must attend events if she wants to keep her job. I have more tales like that if you please.

Thus any picture of Chavez rally today must be seen as including a significant component of non-Caracas folks. Nothing bad with that. But it would have been nice to let the opposition drive to

Caracas in its few buses, and not to sabotage the Caracas subway again with unaccountable delays and partial closings. Let's play fair, should we not? That way we can compare what can be compared. With this caveat let's look at the pictures coming from the ABN, the official propaganda news agency of the government. Surely they will post the best possible ones.

The first one is an aerial view. Is it not nice to have such a distance picture from chavistas marches while the opposition is not allow to fly an helicopter above its marches? So, it looks good from above, and we can see that the Lecuna and the Universidad have also quite a lot of red people. The buses on the Lecuna seem to be parked in an area where we cannot see them from this take. Then the ABN

gives us a close up, and if you look carefully at the end of the Bolivar (on the left side) you can see that already it is a little bit clearer than in front. Though with the people arriving it would be full.

But the ABN gives us yet another picture this time of the Bolivar itself.

And it looks packed. However, it happens to be taken exactly from where the clearing started in the picture on the right. It also seems to have been taken a little bit later, as for the lighting but I might be wrong on that. At any rate, let's not begrudge Chavez: he did fill up the Bolivar for the first time in a long time. But there were still less people than in any of the pictures I showed, or Alek showed. By the way, there is something just wrong with all that red, you know....

The VTV coverage that I saw did confirm my impression of the ABN pics: Llaguno (of infamous symbolism) and Bolivar filled up. But that was that. Where Chavez did not disappoint was in a discourse worse than ever, with such violence that his face was distorted in abominable rictus of hatred and violence. Otherwise nothing new, all the same anti US B.S. With just an added item to confirm that if Chavez is reelected there will be even less democracy: he announced that the Bolivarian Revolution was the only option. Period. I suppose that I can already start signing up for my choice of reeducation/concentration camp, surely to the great glee of the numerous detractors that read this blog when no one is watching.

The Bolivar rally after all was a meager consolation for Chavez. He could not outdo Rosales, and meanwhile this one was having full house in Valencia. However Chavez got a nice score when Correa won in Ecuador.

The Ecuadorian election was for Noboa to lose, and he did it. He did not even manage to get the support of the moderate right, and attacked so much Correa on Chavez that it eventually backfired on him. I am not surprised. And I am not too sorry as Noboa as proven himself in this second round vote to be hardly any better than Bucaram. After all Ecuador is unruly and Correa has no congressional support. Will he last a year? Two perhaps?

No point in writing the obituary in Ecuador. After all Correa is not an uncouth barrack soldier like Chavez. Who knows, he might even be what Ecuador needs. But I detect some messianic traits in him and this more than ever conforms me in that presidential systems are bad for LAtAm. Period.

Meanwhile, let's allow Chavez enjoy this cheap point. At least Ecuador should not be as expensive for us as Cuba.

Tags: chavez, elecciones3D, rosales
Posted by Daniel at 3:55 AM