Campaign closings in Venezuela: we are all Maracuchos

Today was the real last full day of campaign in Venezuela. As tensions mount we see even more intense rallies than past days. However Rosales keeps ahead. To read the rest of this post I suggest that you play in the background this link. This will give you the gaitas played tonight at the Maracaibo colossal rally. Well, it is not what was played during the firework display, they had a live performance of the gaita in a different version from the second half of this link, but you can get an idea. And tonight this Caraqueño, turned out Yaracuyano, must confess that he felt Maracucho too . Yes, I know, I am turning corny but who could resist the final apotheosis of the Rosales campaign in Marcaibo, something that Chavez has never done in Maracaibo, and perhaps not even in Caracas. It was truly a magical moment and "se me nublo la mente".

Rosales finishes on a high note 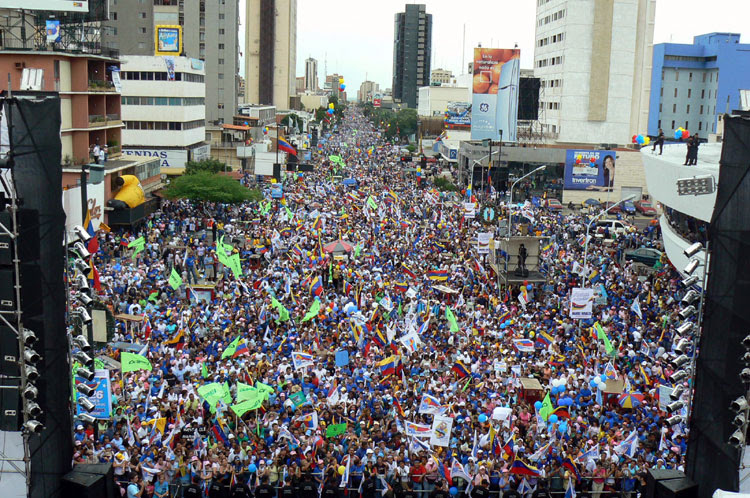 Last night in Puerto La Cruz, they tried to stop Rosales: his plane was not allowed to land in Barcelona and he had to go to San Tome and speed ride to Puerto La Cruz. Poeple waited for Rosales. It rained. They kept waiting. Rosales arrived and he got the biggest rally of the campaign in that area of the country. And the government looked meaner and pettier than ever.

Tonight it was Maracaibo, his home state, where Maracuchos feeling the wind turning gave him a rousing send off. I think that with just what was in the Avenida 5 de Julio Rosales had enough to win in Zulia (picture courtesy of Vcrisis, look how far the crowd goes!). And it came with fireworks included with the most emotional Gaita perhaps as a background. I wonder if international observers had a clue as to the magic of this moment, but even blasé little me was taken by it all.

As I was driving home today after a week in Caracas, the surprise over the cel phone was a last minute trip of Chavez to Yaracuy. Chavez in Yaracuy this late in the campaign? Since when the boonies are key destinations in the last days of a campaign? The first thing I thought is that numbers must be pretty bad for Chavez if he tries to come to get an extra few thousand votes in San Felipe.

Before that he was in Trujillo, another small state, where he got a rather decent turnout in Valera, confirming my prediction that Trujillo is the weak link in the Andes for Rosales take. But the good feeling that Chavez might have gotten in Trujillo was soon spoiled with the near disaster of Yaracuy. To begin with the last minute plan did not work out very well. I know, I had a doctor's appointment two blocks from the grand stand and I could find parking space, and even reach the spot: the Cartagena was still empty, red shirts just starting to arrive.

Chavez came and went: he did not spend more than half an hour and by the time I left my appointment I could only see a few laggards huddled in front of "licorerias" swinging a few brews, waiting for the sudden rain to go away. Tonight TV showed the magnitude of the disaster: the sound system failed, chavistas complained to Chavez that the local PODEMOS governor Gimenez sucked bug time and that Chavez should get rid of him. Podemos folks were rather absent as the quarrel between chavista allies aggravates more and more in Yaracuy. There was even a "fee Lapi" banner held by a group of chavistas which was promptly destroyed by another group of chavista. When some chavistas support the ex anti Chavez governor you know that something is really wrong in the state.

The electoral result of Yaracuy is anyone's guess..... but Chavez troubles are becoming more and more apparent. Even if he wins, it will not be a bed of roses for him.

And while we are at it I must come out and say that I heartily endorse Rosales. That is, I had no problem to support him before, from the days we were planning for a primary. Teodoro was my favorite then but I did write that anyone of Teodoro, Rosales or Borges would be OK with me.

Now I must recognize that Rosales has made a fantastic campaign and has achieved more than anyone could have expected the opposition to do 6 months ago. He has risen to the occasion on a spectacular, if surprising way. But I should not have been surprised. I suspected it but I had some doubts. I always sensed the strength he could have as running as an anti Caracas politician, a pol strictly from the provinces. And he played it beautifully, he cornered Chavez all the time, he made Chavez the conservative candidate, he kept the initiative all the time and the crowds kept growing, every time.

But he also made a believer out of me. I can see through his populist agenda, something he is obliged to do if he wants to unseat Chavez. At least he will make populism work better than Chavez: he has shown signs to run populist programs on a criteria of cost/effectiveness. But more than anything else, Mi Negra outrageous populism is actually a threat to populism. If Mi Negra is carried well, it will diminish the weight of bureaucracy and it will teach people to prefer direct handout that they can use to assume their own choices. Chavez offers only more misiones, more dependency from Caracas bureaucrats. In fact, a Rosales administration could turn out to be a true revolutionary administration in Venezuela.

See, Maracuchos are self reliant people because they have not benefited from the oil under their feet. Tonight Maracaibo told the country that it was sick of Chavez taking Zulia's money to give it away. Great things might be about to happen in Venezuela as Zulianos might be about to send us one of them to decide over our future. I will look forward to it Manuel.