Venezuela once again on the edge 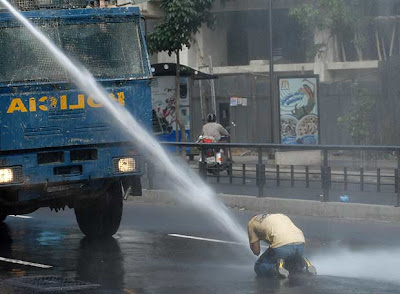 So it is like that: Chavez won in December 2006 with 63% of the vote and today half of the country was out of order, and the other half barely coping. The love fest that should have happened as of December 4, usually called a political honey moon, fizzled in a very few days and since late December the tensions have increased to the point that Chavez today is openly threatening Globovision with closing. And, make this very clear in your minds, he has only himself to blame. I do not know whether he means it as he claims he meant it in 2002 so he could purge the army and PDVSA, but it certainly looks like quite a mess today. One thing is certain if purges are the objective again: his targets are the media and closing freedom of expression, the last obstacle for absolute control of the country until kingdom comes (whichever kingdom comes first).

I was at work today so I am going to try to knit the story the best I can at 6PM. The pictures of this post have been lifted from El Pais of Spain. They have a great slide show and I lifted my three favorites, with that one above, truly symbolic of the aims of Chavez. Click all to enlarge (hat tip Y.L.).

The day started with unrest. Even San Felipe managed to have about 50 students (some with high school uniforms) protesting in front of the very chavista IUTY (well, very chavista in its direction at least, I am not so sure about the student body but the IUTY is a den of chavista conspiracy). But unrest has been going on, complementing was had started yesterday (the summary of the outside Caracas activities here).

Eventually we had new clashes in Chacaito and rallies in Valencia. The one in Valencia affected the whole country as the collapse of the ARC basically brings the country to a stand still. I should know: one of our delivery trucks got stuck for 5 hours and eventually management had to tell the driver to come back without completing the delivery. A work day wasted at work but I do not mind if it is because of courageous students in Valencia.

International condemnations kept arriving. Among them we had the IAPA worrying about a domino effect from Venezuela, in particular in Ecuador where Correa is showing all the signs of becoming another little fascist twit. Criticism ranged from the Panama Journalists union through Spanish Senator Anasagasti, and reached Chile President Bachelet somewhat becoming more assertive where Chavez is concerned (though Lula unaccountably remains silent though some of his allies are perhaps conveniently dispatched to criticize Chavez).

Surely Chavez is starting to become exasperated that he made a mistake and people noticed it. Predictable psychological attitude

and response, by the way, even if he has a failed shrink for Vice President.

Let's start with the vice president in question before we move on to Chavez. This one made a show of himself welcoming the students of the UBV, the chavista school for the revolution, implying of course that there are good students, ready to follow Chavez anywhere, all in uniforms, red shirts, fist in the air, and bad students, those who get their text books from some US agency, without uniforms and a messy behavior. Or some other subliminal psychiatric crap as he is used to give us. Has Rodriguez ever been a student?

But the interior ministry, Carreño of Direct TV fame for saying that this one spied on us through a secret camera inside the decoder, was not going to remain behind and brandished the banner of international conspiracy. Apparently the media is planning to unseat/kill Chavez, something they could not do in 2002, 2003, 2004 or 2006. But now that they are weaker than ever they are trying again. Oh, hum, yawn... However, quickly, PODEMOS, in enough trouble already, crawled from under its rock to say that they were not implicated in any Chavez assassination plan. Apparently Lara has said that Globovison is openly asking for Chavez assassination. Yeah, right, now, in 2006, when it is alone in Venezuela.... Still, and curiously, PODEMOS Garcia also in his speech called for his National Assembly brethren to wake up and realize that they also need to talk to that half of the country they ignore. Interesting detail, very interesting....

Thus, how can one be surprised when Chavez came out with the big guns earlier on today! His cadena touched a few noteworthy points about his plans and mental condition.

First he dismissed the extensive student marches because he decided that they are not a majority of students. Let's go beyond the possible fact that perhaps the only historical case where students protesting in the streets were a majority was France in May 1968. Instead let's focus on how this comment by itself is revealing of how undemocratic Chavez is. Should we take it at face value that if somehow we could prove to him that 50% plus 1 student were to be proven to be in the streets protesting then he should receive them on the spot? We all know that this would not happen because simply there would be no way he would receive the evidence to begin with. No, what it reveals is more profound, it is the refusal to acknowledge that someone might think differently than him. If someone is courageous enough to place himself or herself in front of a water cannon, then perhaps the reasonable thing would be to send somebody to establish contact with that crowd. No, the first reflex of Chavez is to crush that, just as Putin is crushing everything, from journalists protesting to a Moscow Gay Pride.

But let's move on further into Chavez cadena summary. Chavez moved on to direct threats against all the media that are not getting the message of the closing of RCTV. That is, he told Globovision to "coger minimo", which means to cool down and behave otherwise, well, you know what he will do. It is clear, Globovision has been served noticed, as I said earlier, before the RCTV cameras had time to cool down. Oh! and I was forgetting, there was also the class war call, duly echoed by firebrand Iris Varela suggesting that the West Of Caracas should march to the East. To? Scare them? Ransack them? Check out the third picture of this post and tell me whether these people live in the Eastern or Western part of Caracas.

Thus the table is set. The popular reaction of these few days have been more than what chavismo was expecting. In fact, no one expected such a student movement, not seen in years if not decades! But Chavez is probably welcoming these protests as an excuse to close Globovision, and perhaps even start attacking some newspapers. The regime will go there one day or the other and nobody knows this as well as Chavez. He might have already decided over the week end that since the damage done to his reputation is so big, so much bigger than what he thought it would be, then he might as well forge ahead and bag it all at once. Why not? For a low class soldier and a budding fascist, that is the way to go.

I for one would welcome such a move. Since I consider that we are already under a military regime, might as well have the reality of it rubbed in the nose of the "chavista light" and the complacent world who did not hear our warnings before, or worse, who chose to ignore them while they were lining up at the cashier. Let's Venezuela come out of its fascist closet once and for all. Chavez has done it all now, even shooting students and pissing on them.