The cadena of fear: Carabobo in Caracas

Yesterday was yet another anniversary of the battle of Carabobo, our Yorktown (our Austerlitz?, our Waterloo?), that battle that made the independence of Venezuela irreversible.

Usually at that date the armed forces hold a nice rally on the Carabobo field, in all regalia. The background is not bad, graced with the famous Carabobo arch, with lots of space for crowds to attend the festivities, a large tribune for officials, speeches and what not.

Well, under Chavez things have started to change. First the governor of Carabobo was barred to attend the festivities, a little bit as if there were an official event at Yorktown and the governors of Virginia and Maryland were asked not to attend because they were of a different political party than the US president. But soon that arrogance was not enough. Even though the military parade was accompanied now with some bizarre floats of popular inspiration, Chavez found out that more and more of the people who attended did not pay attention to El Supremo speech, having quite a party trying to get their hands on free food or drinks, if not outright screaming to try to get to Chavez and ask him for a house or what not.

This year, Chavez is hurt by the student dissenting protest, a general animosity as per the closing of RCTV, and duly scalded by the failure of the intended pump and circumstances of the bridge reopening when crowds of neighboring shantytowns crashed the party. Thus Chavez did not take chances: Carabobo now was held in Caracas, as a private ceremony between Chavez and HIS army, the one he will use to stop the invasion of the Empire.

On the left side below you have a picture of the cadena (you know, that compulsory simultaneous broadcast over ALL airborne media of Venezuela). 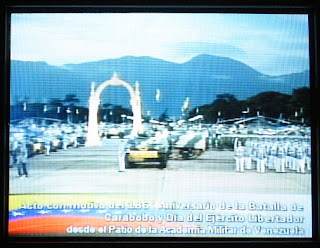 Let me list how many thing were wrong with that picture and why I think they were intended as such.

I could keep going on with this analysis but the reader already detects the point: a victorious government, a government which has the initiative, which holds the high ground, which incarnates the high moral values of the country does not need to hold such a pitiful show. It does not need to be as vulgar or as arrogant. Chavez yesterday as shown to us that he has lost the initiative. All points out to a last minute arrangement, made it more palatable to the army by announcing a 30% pay increase for them.

There was a little incident that says a lot not only about Chavez bloated ego and his sense that all belongs to him, but about his lousy management style. At one point he wanted to show a Kalashnikov. So he screamed for a soldier to rush up to him and bring a weapon (empty of any bullets, I am sure). Some young guy beat the other ones and Chavez said "ten days leave for him". That is right, because the kid was the first one with the gun at Chavez feet he will get ten days off from his military duties. A little bit as if I were screamign from my office "coffee" and the staff would fight over each other to be the first one to bring me the coffee in the hope I will 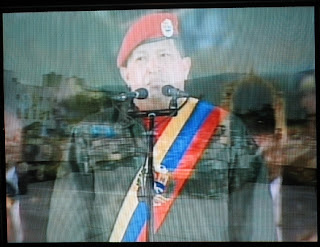 say "one day bonus". If business were run like that they would soon be totally bankrupt. But I suppose a revolution has to be run as such, on high sycophancy levels.

To finish this post I will leave you with one of those artistic and "meaningful" fade outs that the cadena treated us with. You can see the bloated, military dressed and ridiculously sashed Chavez, with in the background the pitiful show he put up last night. Truly, a picture is worth a thousand words.

PS: all pictures taken from my TV