Some Venezuelans are more equal than others

The pernicious side of things such as Chavez saying all the time that if you are not with me, unconditionally, then you are against me is that it leads directly to monstrosities like the political apartheid making Tascon list (see references on the right side column about this list used for political discrimination in Venezuela since 2004). And when the perpetrators of such fascist instruments go unpunished and are allowed to remain in the National Assembly you can easily guess that the public administration in Venezuela stops seen anything wrong with granting itself unacceptable privileges. Tal Cual has got its hands on two internal memos which clearly show to which extent privilege reaches only revolutionary "elites" while the common man is left to fend for itself. 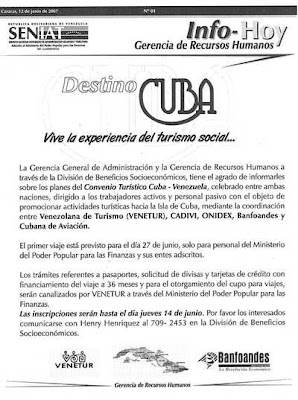 This ad above promotes vacations in Cuba, social tourism they call it. On June 27 the first contingent of happy tourists, exclusively for employees of the finance ministry, will leave for Cuba where they will spend a few nights in Varadero and Havana. So far you might say that there is really nothing intrinsically wrong with that: so many institutions sponsor such group trips. But the Devil, and it is a big Devil, trust me, is in the details.

See, the first thing is that an incredibly cumbersome paperwork which is demanded to Venezuelan citizens is taken in charge by the government with internal connections that are just totally unfair, if not grotesque. To help you understand better, imagine that Daniel Duquenal wanted to go to Cuba on his own.

First he needs to get a passport. Trough 2006 he could NEVER access the web site of the ONIDEX, the prerequisite to obtain a new passport as his old one was about to expire. In sheer desperation he had to pay 40USD (a bargain!!! as most "intermediates" charge around 100USD) to access a passport appointment. What was more galling is that this precise week Daniel failed again to obtain an appointment for Yaracuy State. Appointment are allocated according to geographical areas, and are given to Yaracuy from Monday to Wednesday. Well, after Daniel failed on a given Wednesday he finally relented and paid. Imagine that! The contact got him his precious appointment that VERY SAME THURSDAY!!!!

Second Daniel needs to obtain a permit to buy foreign currency, namely USD or Euros. Fortunately he had that permit log ago but to get it today he would have to battle for days the CADIVI web page. CADIVI is the only organization allowed to permit you to get access to foreign currency in Venezuela. Apparently once you access CADIVI you usually get your permit in 48 hours, but accessing the darned page can take days and days.

Third, Daniel needs to buy his vacation USD. For this he needs to buy a plane ticket, fully paid, and then go to his bank PERSONALLY, show all the paper work from CADIVI, his original ID and passport, his plane ticket. Then the bank processes it, and the result comes a few days later. IF Daniel wants cash he can get it but with additional paperwork and only 500 USD a year (it used to be 400).

There might be extra steps, such as for example being allowed to travel to Cuba. Or finding an adequate package for the trip. Or wanting to use another airline than Cubana de Aviacion. Or be denied CADIVI dollars and lose weeks in appeals. Etc, etc...

Well, if you work for the government they will take care of EVERYTHING, EVERYTHING!

They will negotiate for you with CADIVI. They will get you your passport. And a Credit card. They will finance your trip thus as to pay it in 36 months (Daniel pays cash or with 18% interest rate, more if he puts it on his credit card). They will get you the cash you need. They will plan the tour and make all the necessary reservations (through Cubana de Aviacion, of course). This is social tourism!!! The socialist credit cards and financing and short cuts. But it goes without saying that you better wear a red t-shirt with the "Patria , Socialismo o Muerte" when you go and sign up for the trip..........

But there is another event that has people running around like crazy: the Copa America. Unfortunately people run around as the ticket sales have been a mess though black market resellers abound. It is now quite clear that the government has made sure that a large portions of the available tickets go to good revolutionaries. You doubt it? Read the ad below, also from the SENIAT, this noble and fair agency, our IRS like, which has only the best interests of the country in its mind. 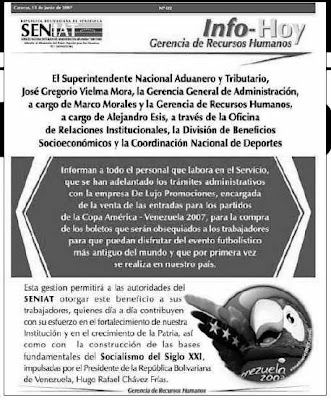 In this ad you can read that the tickets will be given FOR FREE, without even needing to stand in line somewhere, to the noble personnel of the SENIAT to recompense them for their revolutionary task. I am not making this up, it reads literally: "who contribute [...] to construction of the fundamental base of XXI Century Socialism [their emphasis] promoted by the President of the Bolivarian Republic of Venezuela, Hugo Rafael Chavez Frias [complete wording!]"

So there you are, as I reported earlier, the COPA NO ES DE TODOS, ES DE LOS CHAVISTAS. That is, the Copa America is officially a pro Chavez promoting event. It will be interesting to observe how far chavismo will go.

PS: the other day I had to renew my fiscal registry (mandatory in Venezuela, as apparently the ID card is not enough for the SENIAT). While I had to wait my turn in the waiting room I was forced to watch over and over a propaganda DVD about the SENIAT activities. Every ten words had to be one of this short list: revolucion, socialismo, chavez, bolivariano. It was pathetic.