Well, it seems that the final result was even worse than expected (read preceding post).

According to El Nacional (subscription only) of the 168 petitions only one has a chance to succeed. Even if Jose Vicente Rangel tries to pin down the blame on the opposition, the numbers tell a story of outmost failure for the chavista project. Let's look at the preliminary result for Didalco Bolivar, governor of Aragua state who was a few weeks ago duly insulted by Chavez who asked that his followers petition for a recall election. Well, to force a recall election on Didalco Bolivar the petitioners must obtain 199,552 signatures (20% of the registered voters in Aragua). Guess how many might have been raised? Less than 3,000. Not even 1.5% of what was needed. Barely 0.3% of Aragua registered electors.

It is with such numbers that you truly measure the cynicism of Rangel. Was it the opposition fault that the petition drive failed so miserably in Aragua? Is the opposition supposed to make Chavez dirty work even in removing those among his followers that have ceased to please him?

In other words, chavismo tonight is trying to find desperately a scapegoat for the catastrophe of this weekend. None of them of course is even able to wonder if the Tascon list might just have had a tiny effect on the overly dismal result.

Fortunately there is also the comic aspect of it, which comes rather unexpectedly from Tarek William Saab, the governor of Anzoategui, where the petition drive against him has failed equally as miserably as the one for Didalco Bolivar.

To begin with he dares to say that there should be financial sanctions of those who called for such an expensive process that yielded such pitiful results.

So far so good.

Unfortunately for Tarek his mouth kept running. The islamo-fascist creep that he has become seems to believe that since less than 0.5% of his state voters signed against him, then it must be a reflection of what an extraordinary governor he is. He claims, for example, that he has inaugurated more public works in 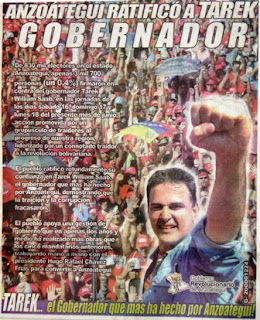 two years than the 5 previous governors combined in all their terms, full or not. I suppose that we should perhaps define what is a "public work". Does for example refurbishing the toilets of the sate house count as one of the 1500 plus achievements he claims?

But it gets better as the picture on the right shows: Tarek was ready with a victory poster!!!!! You may click to enlarge and thus read the edifying democratic words in the poster published in El Universal. I translate part of them:

"...petition promoted by tiny group of traitors to the progress of our region, [group] lead by a well known traitor of the bolivarian revolution."

"...demonstrating that treason and corruption have failed." [sic]

And I will pass on the title that leads one to think that 99.5% of Anzoategui is for Tarek...

Now, with such a language, with such a way to describe the "tiny group" that asked for a Recall Election can you honestly think of such a petition ever to happen again in Anzoategui? at least as long as Tarek is governor? Because you got that right, if you want to hold a recall election against Tarek William Saab, you are a traitor. I suppose that now Tarek should go an prosecute (persecute?) them petitioners/traitors..............

And so gets buried once and for all the recall election process in Venezuela.

Hey, Hugo, why not cancel these constitutional articles in the constitution modification you are planning in secret? Let's not bother with this farce anymore, you are the big boss and the only one whose electoral defeat would matter. The other ones are all your peons, we know that. Let's cut the crap and call things the way they are.