The campaign Chavez will run

Today we got a serious hint as to how Chavez will run the referendum campaign: a referendum/election that is once more set on him, his persona, his character. Love it or leave it, literally. The opposition will be well advised to realize this ASAP.

This morning I woke up with a migraine. So, after 800mg of Ibuprofen I went back to bed until I could emerge in a daze around 11AM (no, no hard partying last night, I just suffer of recurrent migraines). I suppose that the Ibuprofen having left me numb, as I surfed TV at low volume I saw the beginning of today's Alo Presidente. I admit that I never watch it though on occasion I

will watch a cadena. But Chavez was in an Oriente beach, a region that I particularly know and care for. So, the dumbness helping I decided to veg out in front of the TV. I was not disappointed: soon he was removing his shoes and waded into the water to met some children that were enthusiastically waiting for the chance. All with that arranged spontaneity" that characterizes so well the regime made for TV shows.....

I will pass on the lame comments on how he wished that he could go and take a dive in the water but he was "enslaved" to his job. The thing is that right then and there I understood what would the campaign of Chavez be: trust me, I love you, I love your kids, vote for these "reforms" and you will be the better for it. There will be no debate, nothing, just the same love me, hate the non-rojo-rojito folks of last year.

Of course, seeing Chavez ruining his tailor made pants by wading in the water for show was too much for me, I shut the TV and went for a cold shower. But tonight as I checked out the headlines of the day, that impression I had was widely confirmed.

The tidbits were juicy and point out to Chavez circling the wagons and preparing once again his "it is us against them". Perhaps the worst offense was for CNN female journalists that made fun of his wish to change Venezuela's time zone. On that account he should also insult me who excoriated his ridiculous decision much worse that the Colombian born anchors of CNN. In fact Chavez went ahead and said that it was a shame that "latinas" would make fun of Chavez. It was not a lapsus bruti, it was a deliberate attack on CNN: he repeated at least three times that it was a shame that "latinas" would make fun of him. While of course giving the usual anti media cum imperium speech. If you doubt me you can listen Chavez own words, nicely offered in a short clip by RNV, the state propaganda radio system. They actually think that Chavez did good, unbelievable! 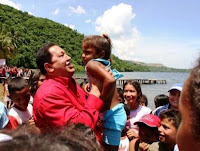 You can hear here Chavez as his most vulgar, machista, manipulator self; but also at his most offended. Because that he had to go against CNN that strongly only verifies what I wrote about: he made his own that time zone proposal and he is personally offended when people point out how ridiculous and out of touch with the real needs of the country Chavez has become, even if he carries kids in his arms while ruining his tailor made slacks paid by the tax payer. By the way, Chavez could not advance anything but banalities as to the change of official hour, just "studies" that we would love to see. But peer review is probably not inside chavista lexicon.

But RNV also carries another victim of chavismo anger: European public opinion who is very perturbed about Chavez wishes for life presidency. And in this case we even have another journalist, from the Guardian nothing less, who did not get insulted like the CNN ones, but was certainly not praised much. In fact I wonder what Rory Carroll thought about the "special" research report that was done by the constitutional commission (named by Chavez alone, let's not forget). That commission wasted precious tax payer money for something that this blogger would have gladly have done for free: to find out that there are no term limits in many European countries. But I am sure that this report did not carry the considerable restraints that exist in Europe that make it possible that parliamentarian systems have no term limits, or that kings and queens do not need to be submitted to recall election, as Chavez grossly joked about. It is always amazing when willful ignorance is presented as virtue and I suppose that in a regime of mediocrity ignorance must look as a virtue. Note: I wonder if it would take me as long to trash that report as it took me to expose how ignorant of the French political system Chavez is.

But anyway, these plus the announcement that 5% of the budget will be for direct transfer to the comunas the tone was set, in my opinion, for the coming campaign. People of course will forget that the 25% due to the states was never fulfilled thinking that perhaps a meager 5% might actually percolate to them. My opinion on that is that the 5% will go ONLY to chavista communities, and will be skimmed largely for political purposes before something truly trickles down. But I am such a cynic....

The tone will be clearly US AGAINST THEM. The campaign again will be aggressive. Debate and discussion will be absent. Chavez will never be questioned and if a journalist manages to sneak in a question like today, he will be put in his or her place (another Chinese journalist was nicely trying to get a more precise meaning for XXI century socialism and will return home not much wiser). And if you doubt me for a second look at the more than fascist declarations of corrupt Miranda governor Diosdado Cabello saying that those who do not like Chavez or the reform are welcome to leave, that there is enough people around Chavez and that we are not neded.

So, what is the opposition to do? I will not change yet what I wrote about it a couple of days ago, but I would like to add something: saying NO just tot he reelection could end up become counter productive because it will help Chavez make this contest a referendum on him and not his proposals. And that, my friends, he has a very good chance to win without cheating! He has learned long ago how to manipulate an ignorant base that could not care less whether there are terms limits in Estonia or whether the Central Bank is autonomous. For them the only question that matters is "what is in it for me?".

If we make this campaign an us against Chavez then stupid proposals such as the 36 hours will be seen by some as a guarantee to get more money for less work, EVEN if they are currently unemployed. That is the wonder when you deal with an electorate whose largest chunk has been kept in ignorance since well before Chavez. He certainly has not tried to change that. Did you know that the SAT this year in Venezuela gave 70% of high school graduates with not enough skills to attempt college? (1)

So it is going a little bit more tricky than expected to campaign. Saying NO to reelection and sticking to it could backfire dramatically. And even trying to stick to corruption alone, to bags full of cash alone might not be enough. Time for the leadership of the opposition to rise to the challenge. So far I see very little of it, which might explain why Chavez is already going to the "me or them" thing: to knock off the opposition effort from the very start!

A ruined pair of slacks is a very small price to pay for yet another victory.

1) Confidential report from a friend working in one of the education ministries. This predicted result is certainly why Chavez wants to suppress the Venezuelan SAT equivalent so as to force the universities to accept more students even if these have no chance to succeed. I am waiting by the way for the comparison between private school and public school SAT result.