The economic news in the world this end of the year was perhaps the announcement by Petrobras that Brazil has found a new oil field of high quality that could ensure at least a couple decades of Brazil oil consumption. This at a time where biofuels are already a way of life there, where public transportation and small cars are the norm, and when Brazil has already managed to grow self sufficient in oil production.

I remember as a kid listening to Brazil woes: too much jungle, bad agricultural lands, no oil. Today Brazil is minting on its food exports while the world is becoming ready to pay it to preserve its rain forest; this as president Lula did a ceremony about a year ago to bring home the idea that now Brazil was self sufficient in energy. For better or for worse Brazil is now the second power of the Americas. Its natural partner or adversary is the US, not Venezuela or Argentina . Five years of a social democratic Lula administration have yielded the highest trading of its currency, the Real. That is right, Brazil, the joke of hyperinflation and worthless currency is now the country where people are lining up to invest. Lula has quietly applied social reforms he could afford while letting business be. As a result incomes have risen, and not only for the rich.

Oh, it is not over yet, there is still a long road ahead as the Rio 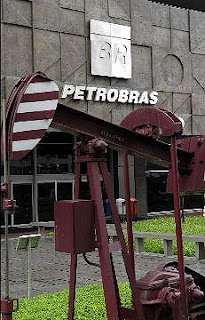 favelhas remind any visitor or as the ferocious gang wars threaten to take over cities like Sao Paulo. But New York city was an immigrant dump in the XIX century and the mob controlled Chicago at some point. The fact is that Brazil is becoming a serious country and the discovery of the Tupi oil field is enough to help it boost its growth rate while not being enough to make it come back to the devastating populism it suffered in the past. We can even say that its discovery off shore is a blessing: it will require a lot of work so we are not talking here of quick drilling and instant populism the way it happened in Venezuela. Still, the South Atlantic coast of South America is not the Caribbean hurricane zone, nor the deadly winter Storms of the North Sea. Exploitation will require work and patience but nothing that Brazilians are not already able to manage by themselves.

The future of Latin America is in Brasilia, not in Caracas or Buenos Aires. Though admittedly if Calderon manages his hand well Mexico City might have at least some voice in what is decided in the continent.

This brings the situation of Chavez and the Kirchner's to a rather pathetic level. Now Argentina will be relegated for good to the role of junior partner of Brazil in Mercosur because, just as is the case of the United States, Brazil does not need anymore any multinational association: Brazil is several nations by itself. Brazil will soon become the market where all want to enter and are willing to sign any deal to enter. I suppose that the mercurial Peronists might get the point and make the necessary corrections. Cristina Kirchner will need to fix up a lot of unfinished business of her husband, and even fix some of his mistakes. If she does get around to do it, her more international outlook (Iran is not her friend for example) will bring her to deal with the Brazilian reality in a productive way, leaving behind the eternal populist tirades of Peronism. Or she might not.

It is interesting to see that some countries have got the Brazilian message long ago. The ones on the periphery of the Brazilian Empire, such as Chile, Peru and Colombia are looking to the open seas for their future, to empires a little bit more distant so as not to pose any real threat to their well being while allowing them to become commercially independent. The ones closer to Brazil are starting to weigh the inevitability of their situation. Bolivia is about to fall apart as Santa Cruz knows that the real power is in Brasilia and not La Paz. Far from the sea, Santa Cruz is looking across the Pantanal from where the only possible source of economic stability is located, for better or for worse. The survival of Evo Morales is tied to how soon he will realize that Brasilia is the way to go, not Caracas. Uruguay has decided to bet on its small size as the only protection it has from Brazil, by turning itself into a knowhow place of services and tourism for whomever is interested, hoping perhaps that a drop of that off shore Brazilian oil is found in Uruguayan waters...

But Caracas and to a less extent Buenos Aires are clueless. Caracas because El Supremo can only think of his personal glory and Buenos Aires, well, because they are Argentineans and they think they are the navel of the world. As Chavez tries to put together his confederation of losers with Cuba, Nicaragua and Ecuador, the State of Sao Paulo by itself will weigh more than this countries tied together. The final outcome does not require a crystal ball.