While I was on the road today on my way to Caracas news came together that made this evening a delightful moment of glee.

On one side the two powerhouses of Latin America decided to start speaking in earnest about free trade and oil cooperation. Mexico and Brazil are now, by far, the two biggest economies south of the Rio Grande. Even if the Mexican one has been battered lately from a larval civil war due to drug captaincies to a flu pandemic, not to mention its unhealthy dependence on exports to the US, it still is varied and large enough to start rebounding any time soon. President Calderon from the right wing PAN is touring Brazil of left wing PT's Lula. Well, I should rather write right of or left of center to describe them but let's hold unto the cliches of that past even though these two man are consummate pragmatists.

During that visit Calderon proposed what should have been proposed long ago, a free trade deal between Brazil and Mexico. Can you imagine what that would mean for Latin America if these two countries could manage such a feat? Their economies are really not complementary but Mexico is an entry to the US and Brazil is an expanding market with a rising technological value. Calderon is certainly aware of that as he is trying still to stir Mexico away of the last two decades of PRI doldrums and he even proposed a cooperation between Pemex and Petrobras.

Let me put it this way, if such a deal is worked out and if it succeeds more or less Latin America could finally once and for all take the path away from underdevelopment. Between them, all the other economies of the sub-continent would have to align their economic policies and the US would need, really need, its FTA to work out full speed with Colombia, Peru and Chile to counter somewhat the new economic colossus that could emerge. Because of course Mercosur would follow Brazil's lead and Mexico would be able to retake its natural area of influence, the Caribbean and Central America.

This is so big that one wonders how come it was not tried out earlier. I suspect that the US recession and a certain protectionist bent of the US since Obama's election must have played a role since Calderon was barely coming out of the North American summit.

I am not sure if Chavez realizes what happened today, what major geological shift suddenly started that could render Venezuela totally insignificant, but he certainly had his head elsewhere, probably up his, well, you know what...

First, the good man took his plane, a tax payer expense, to Cuba just to wish Fidel Castro a happy birthday. No word about the real presents carried to Havana, nor about how many people, all expenses paid, went along with Chavez. Maybe Chavez has accumulated enough frequent flier miles to fly for free to Cuba, including his court?

After this memory trip to a past that is reeking more and more of reactionary if anything because it has already been 50 years of standstill at Havana when the rest of the continent has moved on, Chavez came back to offer yet another old and probably dead idea: whip Obama. I suppose that he got that from Fidel who cannot live without an enemy in Washington. If Obama were a genuine friend of Cuba Fidel would still try to make him an enemy!

So today Chavez said that Obama was lost in space because he called him hypocrite for Chavez wanting him to intervene in Honduras. Note to president Obama: Dear Mr. President, Chavez is like a scorpion, it does not pay to be nice to him because he will always stab you in the back. Though the scorpion has an excuse because of the position of his tail, Chavez has none as he is merely a coward, unable to face the people he insults. In Spanish, on TV, with Chavez grimacing it is much stronger than the Reuters script I link above.

So to make sure what a reactionary throwback Chavez is at heart he went on again on the US having unseated Zelaya, putting the most formal accusation to date. Why so late Hugo? Your other arguments have failed so badly that now you have only leis left to your arsenal? Or is it that you simply cannot abandon the worn out line coming from Fidel? Is there no originality left in you now that your ship of state is having serious leaks? Why not you worry more about the PEMEX-Petrobras bond forming while you have been unable to do a PDVSA-Petrobras bond? I suppose it is because when Petrobras caught whiff of the corrupt set that manages PDVSA even the one at Pemex 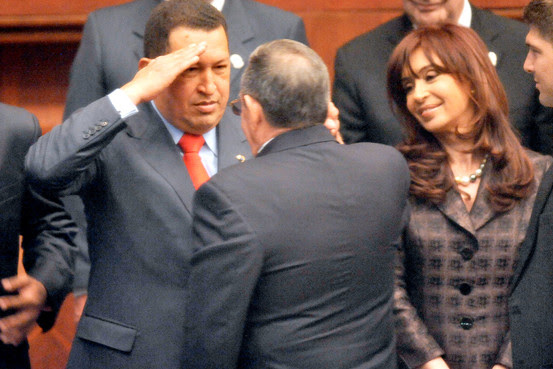 does not look that bad.

Anyway poor Obama gets hit from all sides, including a Wall Street Journal piece by Maria Anastasia O'Grady that includes the infamous picture of Chavez receiving Raul Castro with a military salute, quite a symbol of how passé, retrograde and reactionary the guerrilla left, the military and the the anti US cheapo rhetoric have become (1). The title, "anti American Amigos", says it all, how much at risk is the US policy in Latin America if some new thinking does not come fast at the White House (I am less concerned about State, I think the short is at the White House). You know guys, if you need help you could do worse than calling me, and I would not charge.

The future is more than ever with Lula and Calderon, not with Castro and Chavez and that accidental clown in the picture, the Kirchner fraud.

1) I cannot imagine ANY Venezuelan president in past history salute military the head of state of ANY country. Such image is enough, in my opinion to impeach Chavez. Not even because he is betraying Venezuela but for being so stupid, so lack of self worth. Bolivar must have rolled in his grave!