No Mas Chavez: the fall out in Venezuela 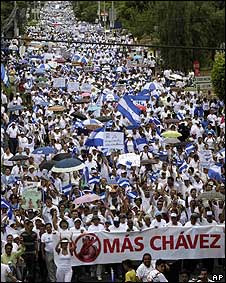 vez rally were, chavista officialdom is really upset. They cannot hide it.

Be it Chavez who takes lots of time to explain to us he does not care, from Syria, from Iran.

Be it the Venezuelan ambassador in Bogota who says that Venezuela is insulted (correction, you might be insulted, I am not) and implying that the Bogota government should not allow such demonstrations.

Be it the half-assed attempt today at calling pro Chavez march across Venezuela as the opposition led another successful and gigantic march in Caracas apparently dwarfing the counter march from chavismo.

Be it the Nazional Assembly member Augusto Montiel associating himself with people beating up anti Chavez protesters in Brussels.

In fact chavismo is so upset that revenge must be exacted. Thus Globovison, the closest object at hand, once again is under attack by a particularly bitter Diosdado Cabello, the guy in charge while Chavez visits the planets collection of tyrants. Not only a new investigation against Globovision is undertaken for a single alleged SMS (whereas the VTV ticker spews constant violence that the regime supports by ignoring them), but 29 more radio stations are to be taken off the air waves (in addition to the 34 already killed). Globovison offers the video of Cabello threats and bitterness. But the world is noticing and Diosdado words hit the news wires fast, even in English. They sure will be a nice complement to Chavez words supporting Iran's nuclear program today.

Meanwhile there will be more wounds to lick for Chavismo: BBCmundo reports that in Honduras the No Mas Chavez was big in 5 cities of the small country while the pro Chavez zelayista camp coudl only manage an activity in Tegucigalpa. The picture on the left is from the BBC mundo site and speaks for itself, even at a time where suddenly the US decides to show more bite against Honduras. A very bad P.R. week for chavismo.