Updated post as I receive info and pictures. So far 9 readers sent their views.

I could not make it but I can post readers pics... (and I can still keep posting them for a couple of days)

MORE Belgian update: the small assembly at Brussels was attacked by hooligans, some apparently did not even speak Spanish. Among them was a Venezuelan representative and a European extreme left wing employee of the EU. More on that later as a police report for aggression has been filed.
update: at second 9 of the video you can see clearly Augusto Montiel, backbencher at the Venezuelan Nazional Assembly (pictured on the right with Tonny Benn 2 years ago, taken from a collection of truly ethnographic and cliche laden silly pictures of the VSC trips to Venezuela). Well, the state propaganda radio, RNV, reported that Montiel was sent in mission over the European Parliament to promote Chavez thesis over the US "bases" in Colombia. Among other activities we are told he was going to organize a march yesterday. Well, it must have been a flop because he had nothing left to do but to act as a hooligan at the No Mas Chavez rally.
Questions: did he do his trip on the 2,500 USD allotted by CADIVI as the only legal amount we have to travel? More importantly, how many Belgian and International laws did Montiel broke yesterday? Will he be punished?

NOTE at 4 PM Caracas time, the NoMasChavez page is down. Should we be suspicious?

NOTE: the size of the crowd is meaningless today, what is important is the simultaneity of the events, the demonstration of the existence of a Venezuelan exile, and of a Colombian exile also affected by Chavez alliance with the FARC. 10 people in Reykjavik count as much as a million in Caracas, as far as I am concerned.

El Universal has an impressive gallery of No Mas Chavez. If by any chance you appear in one of these pictures I can also add it here.

Brett informs us that Seattle had nothing but Vancouver did and he drove up there! Atta boy! 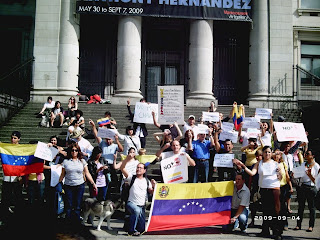 In Brussels things did not go out smoothly. A group of chavista tried to hide the small, but bigger group of anti chavistas. Apparently they were mad enough that they ended up attacking the No Mas Chavez group, in Brussels! One video here where you can see the anger of the chavista faces. At 0:09 you can see clearly in front one of those chavista officials who has been dispatched for a last minute counter propaganda effort after the Bariloche failure, and who took time from his schedule to do in Brussels streets the kind of hooliganism he does constantly in Venezuela. Does anyone remember his name? He appears regularly on VTV.

In Sidney we get to see how important is becoming the Australian exile. Luis illustrates to us, unwillingly, the success of the Australian government in attracting Venezuelan immigration. Another crime that shall be paid by Chavez someday. 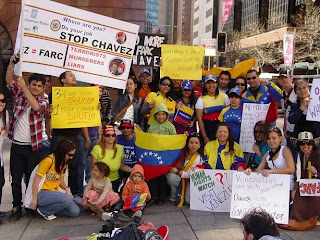 In Toronto they did their homework with poster making, as these two pictures from reader Michael tells us. 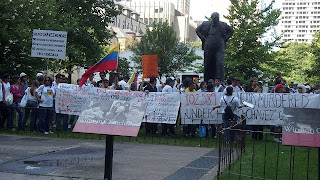 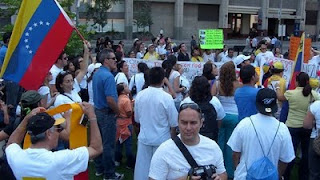 WT from Hamburg, TWO pictures, first the kick ass No Mas Chavez folks, and then an even smaller group of sullen mean looking local pro Chavez. 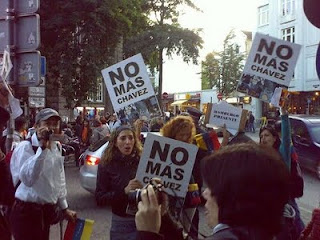 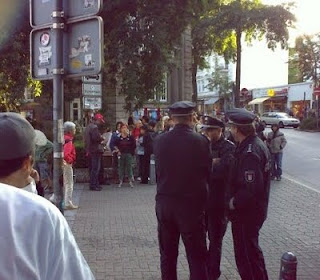 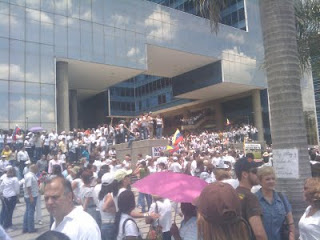 RC from the Windy City, Obamaland 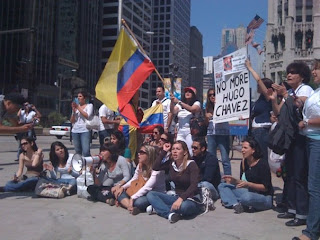 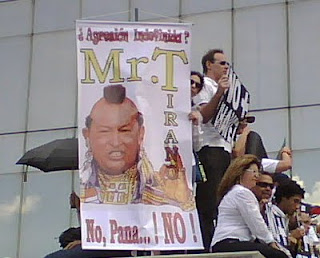 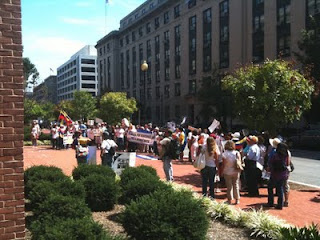 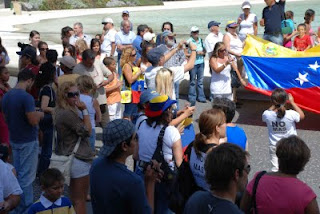