Does the Bolivarian "revolution" respect Bolivar?

The answer of course is NO. The pseudo revolution might venerate Bolivar, adore him, deify him, but it does not respect him.

I confess that for right or wrong I am still so upset about the desecration of the Bolivar Tomb two days ago that I prefer not to write about it yet, at least not until I can find some objectivity.  I have not been able to watch the full video yet, and when I run across the picture of Bolivar skeleton in some newspaper I felt like puking.

It is not that there could not be genuine reasons to open Bolivar´s sarcophagus, they could exist indeed.  The point here is that such reasons do not exist, the ones that have been offered have no justification, do not consider the consequences of what is demanded from the investigation and, in short, are only advanced to justify the capricious necrophilia of Chavez (I am trying not to use stronger psychological words about what is wrong with Chavez).

But the fact of the matter is that even if Chavez promised that the new sarcophagus will be gold and crystal, with a gold plate of the coat of arms of the republic and who knows what else, that does not mean for an instant that Chavez actually respects the Bolivarian memory.  In fact, how can I believe that the ridiculous promise of a new Pantheon for Bolivar alone would be a real mark of respect when Chavez is unable to maintain the Bolivar material heritage.

A friend of mine has relatives that live across what used to be the Bolivar family country house, when Caracas was barely 50,000 people.  Today this casona is smack in the middle of Quinta Crespo and lost long ago any rural feel it might have had.  It is called "la cuadra de Bolivar" which loosely means "Bolivar's stable".  I assume it was the place where they bred the horses they needed to ride, and for their carriages if they used them.

I have visited it five years ago.  It is nothing to write home about but it is a very fine example of what rural hacienda were for the rich, which the Bolivar were, even though Chavez tries to gloss over that fact.  It deserves to be preserved though it has the inconvenient to suffer of a total lack of easy parking nearby, and is not in a very safe zone.  Tourists really need to want to visit the joint.  In other words, it would be a perfect place to organize a museum for rural old Caracas and have it visited through tours mostly, passengers embarking in, say, the town house of Bolivar.

Well, that friend took these pictures about a year and a half ago, and swears that things got worse, not better.  The first picture shows the bad state of the roof with plants growing more and more.  He managed to make the entry guard talk and apparently there are leaks and many areas are about to crumble.  Other pictures he sent me show a general breakdown of the tiles all over, bad paint jobs, etc.... 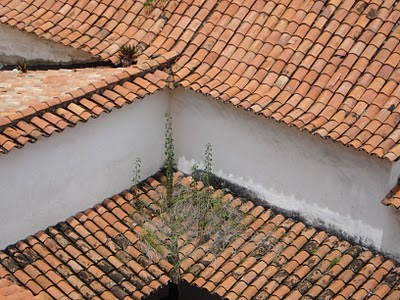 The next two pictures are an example of the ways that house is used.  One, although apparently this has not happened in recent months, is for mini-Mercal markets, food fair where this one is distributed at very low prices.  Of course, from the first picture you can see the long lines that form during such events, a constantly repeated phenomenon everywhere which has made me decide that the long lines associated with Mercal are not only a consequence of inefficiency, they are also a way to teach people to stand in line to get food, Cuba style. 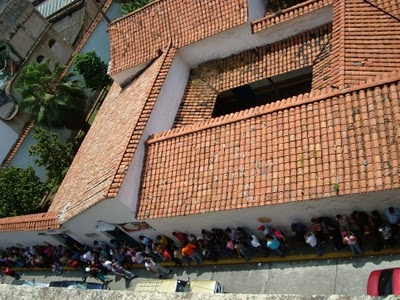 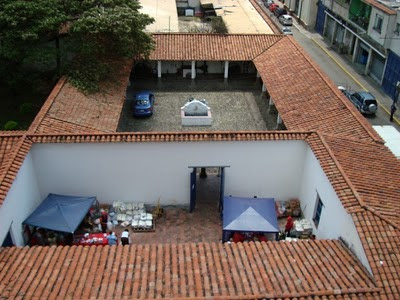 The last picture is a view of the inside.  You can see two of the tents which sell diverse food items, other stands being under the covered porches.  And you can see that someone (of Mercal?) parked his car in the middle of the central patio!  Of course, there must have been not parking outside so whoever it was asked for the gates to be open so any oil leaked could all directly on the venerable cobblestones.

Now, how can a regime that has Bolivar as an idol not be more careful about how it uses the real estate his family left?

Where is the real respect for Bolivar?
Posted by Daniel at 6:01 AM