Le Bastille Day that nobody calls that here

I have not been in France for a July 14 for so many decades that I dare not count.  I think it was probably during my last college year when my siblings came over to spend summer here after I graduated.  Since then I have avoided France in Summer, the more so that my relatives happen to live in beach resort areas which become hellish in July and August.  France is best from me late spring or early fall though I do not mind it at all in winter.

Then again, after today I might have to reconsider some, or at least plan for vacations finishing on, say, July 15.
"le 14 Juillet" as we call it has become in a way an embodiment of French art de vivre (nobody here talks about the Bastille take over of 1789 like in the US where people would come to me to wish me a happy Bastille day leaving askance the first few times).  It is not that the US July 4th is unpleasant: I did enjoy very much a few of them, but the US celebrates its birthday, its independence, whereas France commemorates the revolution  (of which the Bastille take over is just a revolutionary date among many others, bloodier ones at that).  A commemoration is different than a birthday and as such over the years July 14th has become more a day to celebrate "Frenchness" rather than to debate the merits of a particular date.

Celebrating Frenchness includes celebrating the Republic, its secular nature, and thus the day starts with the military parade at the Champs Elysees, always an impressive affair.  There is something about the French flair for military parades that makes even an anti-military guy like me stop and take notice.  One cannot help but be impressed when the French Republican Guard, on horseback please, with adequate blaring brass included,  trots down to the Place de la Concorde where the president and his guests await.  The video below gives you a modest account, but toward the end you get to see some of these horseman, but sideways, not frontal as TV showed live.

Mots-clés : bastille 14juillet afghanistan champs elysees
Video de sbenoist
By the way, for US readers, the military parade was marred this year by the death of 4 more French soldiers in Afghanistan yesterday, suicide bombing.

Every year the parade has a theme and this year it was the French rescue corps, namely the fireman and even more to the point the Paris ones, "les Sapeurs-Pompiers" who also happen for Paris to belong to the armed forces of France.  At the end of the parade they offered a show which looks a lot like a corny gymnastics show, except that you need to realize that the type of activity shown in the video below are actually possible because of the required fitness state of these Sapeurs-Pompiers.  In other words, these guys in tights can actually give a run for their money to the more burly New York Fire department.  And if you think that the ladder moves were kind of dumb, well try to do them on your own and add a fire in front...

But this being France, the military parade run like its trains and at noon sharp it was all over so people could take care of the real business at hand: lunch.

In the US outdoor grills or BBQ are the norm.  Steak or at least burgers.  In France this is rather different although the al fresco idea is retained.  But unless we are in the great outdoors, we sit at a table and the meal is fully cooked gourmet fare, even if some stuff might be thrown on the outdoor grill.  And this set up being an invitation at relatives having lived in Venezuela, well, there is also a hammock in the background. 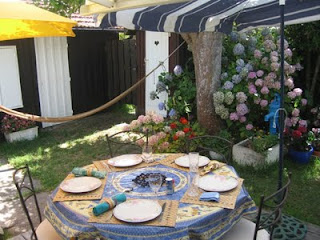 And if US football or baseball is not a tradition here at all, we do have the Tour de France which blessed us this year with the privilege of having a Frenchman hold onto the yellow shirt even though he was expected to lose it today. After all it was the first mountain stage, at the mythical Tourmalet no less, where classifications starts to shift mightily. But the guy had enough time scored ahead that he was able to hold for one more day to his jersey, to the delight of his countrymen. This live on TV while you recover from lunch. 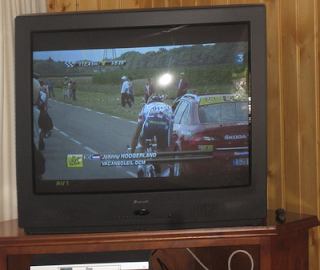 The amiable day, of a particularly nice summer day everywhere, not too warm, ended up with fireworks, held almost everywhere, according to the means of the village or city. Being a rather nice resort town, from the beach we had a nice display. But across the bay we also saw two other fireworks taking place...

The last tradition is a main square public dance that lasted, civilizedly, until 2 AM, no more. But we also had "les forains", other street bands holding smaller dances at different street corners, etc... I had forgotten how much French like to dance (not me). Of course there is a bevy of stands selling from ice cream to crepes, while most restaurants and bars remain open at least until midnight, giving us a very nice street fair that lasts for several blocks.

Indeed, such a nice and amiable way to spend a holiday.

PS:  And no comparison to Venezuela where July 5th is a boring affair where the lousy military parade is mandatory on all TV networks, cadena.  If Chavez were not sick we would have had to endure yet another lengthy and insulting speech.  Here, Sarkozy in electoral year did not even send a short national message.  Civilization and barbary illustrated.
Posted by Daniel at 10:36 AM