One thing was certain: the talk of the town waiting for the Divina Pastora to walk by was of Maria Corina Machado calling Chavez a thief.  That is, for those who did not forget their political interests while performing their marian devotions.  And as the week end progressed she remained the talk of the town, to the point that Chavez himself felt compelled to pretend to be the aggravated party when it was for all to see that he was a mere machista lout in his blurted reply to her last Friday.

The thing is that the Friday show, which lasted 9 hours or something like that, was merely an electoral campaign stunt for Chavez that did not turn as expected and that became the "por ahora" of Maria Corina Machado.  Chavez wanted to use the pretext of the "state of the union" chavista style to prove once and for all that he had recovered and that he was in charge.  Bruni even suggests to us that the ultimate intention of Chavez was to establish a Guinness record just in case he dies or gets the boot next October.  And indeed 9.5 hours is a record that only a more deranged mind than Chavez or Fidel may want to challenge.


Since as it has been the case in the past 12 years that the negative outweighs the positive, as usual Chavez strategy was to speak for hours on end trying to distract the audience with personal anecdotes and stuff like that.  One wonders how a recovering man can stand for 9 hours to speak, but he did (with an adult diaper?),  and his fortitude (drug induced?) was the intended message.  Or that was the intention until it all fizzled out and the 2 minutes of Maria Corina Machado all but annulled the 9 hours of Chavez.

La Patilla had one of the first Youtube excerpts out on the exchange between them.  A lot other versions have come out where the title is altered to suit the media favor (for example pro Chavez Panorama of Maracaibo title the video "Chavez replies to Maria Corina").  So below you have the La Patilla Youtube so you can keep giving hits to make it the most read of the lot.

Some explanations are in order. When Maria Corina addressed Chavez she had been sitting for at least 6 hours listening to the ramblings of Chavez. Anyone in that position would have been exceeded and upon taking the microphone would have been nervous as she was. But that served her well because her few seconds of fame do not look rehearsed at all, the woman really had the wits to overcome her hunger, her desire to visit the rest room, her annoyance, her boredom, her indignation at Chavez abuses and shameless lies, to retort fearlessly to him. No wonder Chavez felt compelled to return to that scene today, and perhaps even to cancel today's Alo Presidente until he can evaluate dealing with that outburst that cost him so much.

For those who do not speak Spanish at all the highlights:
- early Chavez states that if he loses he will surrender power, trying to make amends from his general declarations that they would not recognize an adverse results Observation: the foreign corps is present and those intemperate military words did a lot of damage to Chavez.
- put pause on second 7 and look at an hilarious Soto Rojas enjoying the machista mockery of Chavez toward MCM and her contained anger at such public abuse
- just at sec 24 look at the scornful smile of Chavez thinking he had trashed her
- at second 34 starts MCM reminding that they have been sitting for 8 hours for nothing, telling him that he lied on purpose as to the increase in milk production as all Venezuelan mother know how hard it is to find milk, about the 180,000 mother grieving for a killed relative since he became president, as to his lack of solutions and that the time for bullshit is over.  The chavista crowd in the background mocks her and Chavez to his credit makes them hush (the opposition deputies were not allowed to invite anyone, only chavista are in attendance besides the diplomatic corps who stays mute at all times, see more on that at the end of the post)
- but the line that got most media is when she said that expropriating without adequate payment was robbery (starts at 1:37) which made Chavez react repeating "robbing" (at 1:41)
- and at the end (2:22) Chavez does not reply and, remaining the machista lout he is, demands her to win the primary before she dares asking for a debate, and he keeps trying to find more rather desperate words to humiliate her while the chavista crowd roars in ecstasy at the vulgarity.  Never mind that we all know that never has Chavez debated with anyone, and certainly never again  will he subject himself to the risks of a mere exchange in cadena.

Certainly these two minutes of video cannot illustrate better how undemocratic chavismo has become, how brain washed are its components starting with Chavez who places himself above all.  Certainly for his first real commendable attempt ever to start a debate he blew it badly.

We need to appreciate what Maria Corina has done because let's not pretend that chavismo is not going to try to exact revenge from that one.  How and when is just a matter of time and circumstances.  All of us in the opposition do know that, instinctively now after 12 years.  And as such we do appreciate her selfsacrifice.  True, it will serve her campaign well but the thing is that anyone who observes that video has to conclude that it was not a prepared statement, that it was an impulse response and that the woman, well, she has balls if you will forgive me this machista comment.

In other words Maria Corina Machado puts her money where her mouth his and such a novel thing in Venezuelan politics will have a lot of echo until February 12 and maybe later even if she does not win.  Because this is where the effect of her words must be found.   It is possible that as of Friday the race for 2nd and 3rd slot has become wide open between MCM, PP and LL but also HCR will be affected.

See, the hard opposition core vote is already split between Arria and Machado with a dash to Lopez.  Those "hard core" will stay where they are though she could get some of the Arria vote after Friday.  But there is also a not so hard core vote but hard enough who supports the campaign of Capriles and Perez.  They have accepted pragmatism, avoiding calls of revenge in the hope of trying to get enough chavista votes to win not only in the primaries but also in October.  I have already discussed why I do not agree with that strategy and will not come back on it.  But Friday brought a new element: Machado personal stand has revealed a lot the hypocrisy behind such a pragmatic approach for UNT, PJ and AD.  That has to give a bad taste to many inside who digest badly the idea that most of chavismo will not only go unpunished but will retain enough strength to sabotage and eventually come back Nicaragua style.

It is there where Maria Corina Machado may suddenly start gaining traction and I expect any time soon HCR and PP to become a little bit more incisive in their attacks on Chavez if they know what is better for them.  If they do not, then all ticket spots will be up for grabs in February no matter what polls may be saying today.  And this is quite a stunt for Maria, if you ask me.  And it may be already paying off today at the UNIMET.

Finally, to tie the two posts, from La Pastora to Maria Corina Machado.  La Pastora reminded us some of the good values of Venezuelan society, when for a few hours we can all put aside our differences, still existing after 13 years of chavista onslaught.  But the treatment received by Maria Corina Machado, the situation that forced her to say what she said also remind us that chavismo is deliberately bringing us toward some final confrontation.  You have it all there, in less than 24 hours.  Think about it for a while, will you?

Coming back to Friday.  The S.O. was told on Thursday that it was mandatory attendance Friday in front of the National Assembly to welcome the beloved leader.  So, putting up with that obligation with a grin he took his discrete camera and sends for us a few pictures below (again, the only opposition available at the National Assembly where the Representative because it could not be helped and the hidden ones like the S.O.).  Maybe Maria Corina saw that on her way in and got her upset quite early?  My brief comment under each picture. 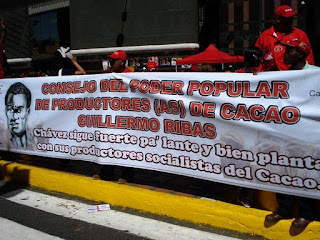 All sorts of bizarre groups with elaborate "spontaneous" banners attended.  In this one you can read that all socialist producers and produceresses (?) of the Guillermo Ribas producing unit wish Chavez well. 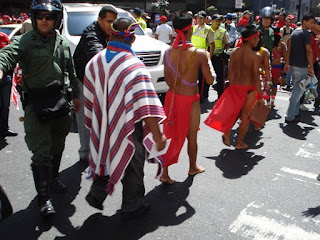 Here we are supposed to believe that they cam from afar, risking their health walking barefoot in Caracas filthy streets..... 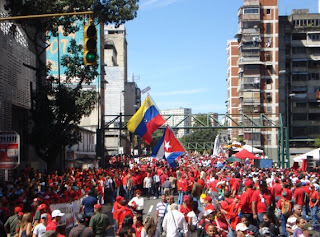 Certainly the adjacent blocks to the National Assembly had to be red, without forgetting Cuba with its flag, mercifully displayed below the Venezuelan one.  What you are seeing of course is mostly public employees getting sort of a day off from that carnival.  El Pueblo has no time for that, needs to go to find milk, sugar, coffee, corn flour, etc and there was no distribution points set up. 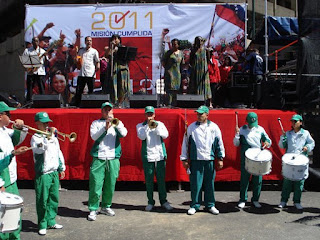 Of course, celebratory music was in order while the banner reads that all the scheduled work for 2011 was well done 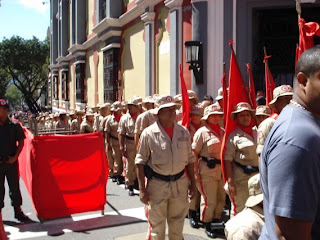 And now we also have chavista brown shirts.  Or is that khaki?
Posted by Daniel at 1:04 AM