Apparently we lost. As I predicted, a high participation favors Chavez. And it was high, very high.

From our mini CNE monitor in New Orleans

Tables hace oficially closed not without contreversy. 250 voters showed last minute. They let 150 of those first there vote. The rest where mostly handicapped people who were slower up the ramp and needed help to get up to voting poll from srreet level.

The consul said too bad not let them in to vote station closed. Huge uproar and commosion heard outside. Currently they are negotiating because CNE in CCS said let them vote.

Update: A few idiots tried to force entry into voting station. Security was forced to closed the doors about 50 handicapped people left without voting

Unoficial word from inside table member in NO: Chavez so far only 1 vote with 52% counted so far

Venezuelans will be the last ones to know....

Reading tweets from Brazil local elections. Apparently they already know hundreds of results, here we need only one and.....

Took a TV break. Blog still down for me but open to many in Venezuela now.

CNE in the mythic "totalizacón" room....

It is amazing: I just realized that with such trouble with Internet and waiting for the mini CNE monitors, I have not watched TV and I rely on twitter for all info!!!!!

VNV mini CNE detects so far slight recovery for Chavez from 2010 but big losses from 2006. Capriles about 2010. Too early to claim victory.

First Mini CNE prediction: in Lara the votes of Falcon stayed with him and went for Capriles. I call Lara for Capriles by at least 5 points (I have few results still....)

Some people in Caracas can open. It would be good to know who is their provider...

Use a proxy to watch my blog in Venezuela. open http://www.zend2.com/ and type in my blog address http://daniel-venezuela.blogspot.com/ I suspect foul play!!!!! Please, pass around.

While I wait for my monitors...

This post was by 2PM the most read this year. And the record for page views for a day was smashed at 4 PM and going. Maybe my page is just down, now that I think of it....

Still impossible to open my page.

Mini CNE observers have already results or the idito head of the table refuses to count because Tibisya has not talked to him yet... unfucking believable, it is past 6 PM, there are no voters in line and the guy does not want to close!!!!

Varianzas exit poll give Capriles ahead but it relies on urban states. Caution!!!!

I have received one semi serious exit poll, an amateur operation but as serious as possible. They give 2 to 4 points Capriles ahead.

I can post and it can be read outside Venezuela.

Blogger all but down. Nobody can see my page in Venezuela. Getting my first results for VNV mini CNE

Report of irregularities in centers monitored by VNV mini CNE.

In El Valle a truck circulates around blaring "señoreees no vamos a dejar que nos detengan el procesoooooo". We are not going to let you stop the revolution.

In rural area near Caracas the privacy cardboard are set too low so it is possible to see who you vote for (voting for Chavez makes you lean forward slightly). Sometimes they allow them to be straightened and sometimes they do not.

¡Boté! awful bad pun in Spanish where throw away and vote are pronounced the same.

There were left a trickle of people from the huge crowds of this morning.  So it went fast.  Details: the PSUV witness did not eat the food that the PSUV brought them....  The MUD people shared their food with them.  Reconciliation has started.

On the logs books while they were looking for my page it was obvious that my center had voted at least 80% already with people still coming in.

FIRST result: from my center and other pro Capriles center the opposition is voting en masse.

Off to try to vote again. On tweeter as of now.  Voting has been heavy and I think abstention is going to be around 20%.  Good or bad?  2 moth ago it was good for chavismo but now I am not so sure.....

Lunch over. Working on VN&V mini CNE. Looking good as fr as participation. May mean the CNE will close shop at 6 PM. Getting psychologically ready to face voting in an hour or so. 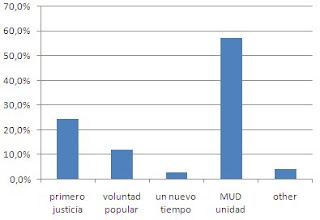 One of the poll on the right is over. I have removed the votes for Chavez which are probably from a couple of people alone. And clearly I have few readers from Zulia.....

I am not surprised that the MUD card, the neutral one, is going to win inside the Capriles camp. At least half of my relatives are using it, even in Caracas. PJ arrogance has a price that fortunately Capriles is not paying.

First Mini VNV CNE.  My people are reporting heavy participation and minor problems overcome, at least those who have reported.  One of them has even reported an exit poll from an embassy and surprise, surprise, Capriles wins by something like 95% there....

I also got another "exit poll" but I have my doubts as it looked so precise, so hourly, that it has gotta be part of the psy war.  Again, do not panic, do not put your faith in outlandish rumors.  Remember, VN&V has been given Capriles ahead since August and the latest prediction was AT LEAST 500,000 votes ahead.

Fail!  I could not vote, lines at my station way too long to stand at this time of day.  I will try again around 3PM.  I did drive around and some polling stations had huge lines and some not.  There is a correlation, the more Capriles expected the vote, the longer the line.  But it may not be what you think.


See, Yaracuy has not used finger print machines since 2004.  Knowing full well the high efficacy of the CNE, it is more than certain that most of these finger prints are lost and now it is as if anyone was being finger printed for the first time again.  However....  in chavista areas where many receive some state subsidy, all of these recipients have had to give their finger prints digital format over and over again.  Hnce lines flow, chavistas vote easily-  But my center had the longest lines of all. Why? It is the center that votes the most against Chavez in the state and thus likely the ones with the least registered finger prints.  Do I smell a rat?

At any rate, people were waiting and people like me will be back at 3 and wait for as long as needed.  I have not been waiting for 14 years to stop now.

A quick shower and off to vote. Behave!
Only tweeter for the next couple of hours.

Out walking the dog, she is desperate...

It looks like a grey day over the country. Rain never good for participation.  Still, huge lines everywhere.

Taking care of business for the VNV mini CNE.  Receiving fiorst pictures. But since Internet is really, really sucky already, I will put only the very best ones. If any.

Crawl out of bed in a foul mood.  After some cold cereal look at my phone to see first messages arriving about "operacion morrocoy" and all sorts of other treacheries in the very few centers I monitor.  I am afraid to imagine what is going on elswhere....

Now, "Hay un camino" van drives by blaring.  I hate all of them

The chavista assholes are launching fireworks and sounding the trumpet in San Felipe- Considering that I coudl not close an eye before 1 AM....
Posted by Daniel at 2:30 PM

Email ThisBlogThis!Share to TwitterShare to FacebookShare to Pinterest
Labels: 2012 megavote, blogging as a way of life