The S.O. did make it again to Bolivar avenue

Except that this time he was flabbergasted. At least that inspired him to make more pictures than last time, even if at times somewhat off color to downright upsetting. Escabrosa is the word he used. As you may recall, he went last Sunday to see Capriles while yesterday was a mandatory business trip to see Chavez. The fate of so many public employees who did not enjoy at all their day in the rain, in the trash, in chaos. As always, click to enlarge. 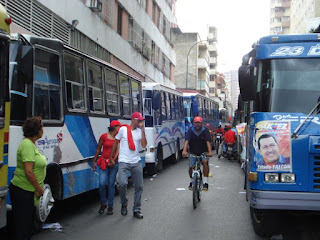 The first picture had to be the talk of the day, buses everywhere, blocking whole street where they parked, for hours, submerging the city in chaos. 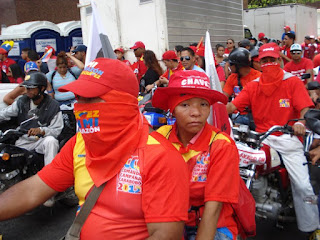 And of course  when wading between bus lines you were confronted with not very reassuring images like this one above.  Fortunately, carrying his visible badge outside they had no problem for pictures. 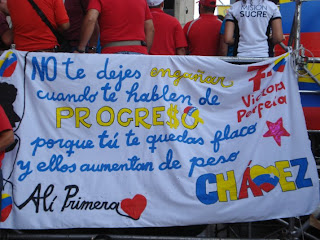 El Flaco certainly got his comeuppance among Chavez faithful.  Here: don't let them fool you when they talk of progress because you remain skinny while they get fat. Old 60ies slogan recycled as needed even if the rich now are all skinny while the obese usually wear red shirts, but I digress... 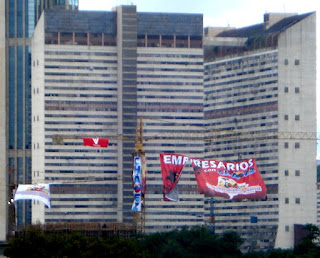 Businessmen with Chavez. Yeah, right, bolibourgeois....  How much to cover the cranes of Mision Vivienda? Has it to be paid off from the excess over-pricing? 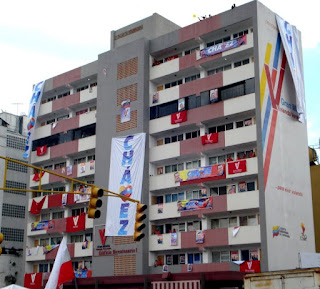 This building appeared in the previous post except that this time around it has a certain pre X-mas feel.  The red I suppose. 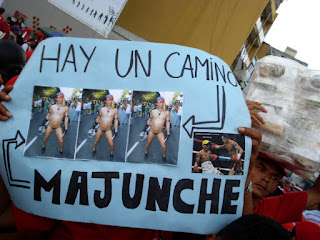 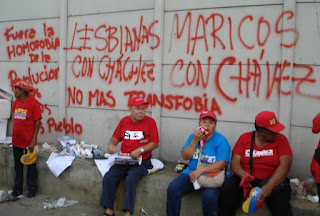 The contradictions of chavismo and its basic latent and not so latent homophobia.  In the above picture the constant attempt at disqualifying Capriles because they think him gay, or not enough wife beating I suppose. And in the picture below, fresh graffiti in honor of Chavez last rally as to Lesbians and Gays with Chavez, except that the word used is marico which goes well belong faggot. At least in polite society because these days even kids playing in the streets use marico without a clue of what it means  Another cultural offering of chavismo. Whatever the intentions of the graffiterer (word?), he has a lot of work to convince the gays supporting Capriles...... 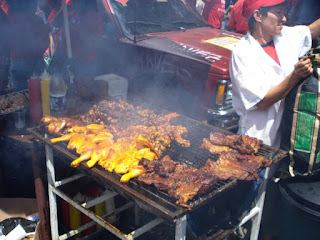 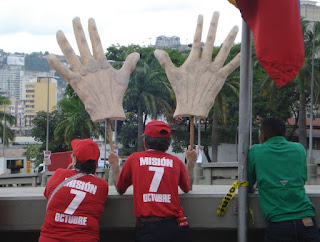 The latest mision, the one that Chavez really cares about and for which there is all the money in the world. 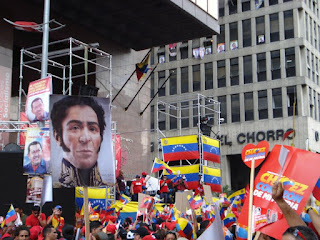 Several corners of Caracas downtown street where thus decked, blocking sidewalks, as if buses were not mortifying enough. 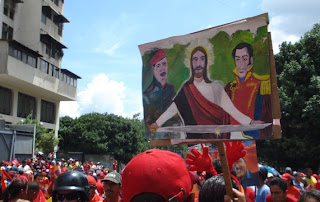 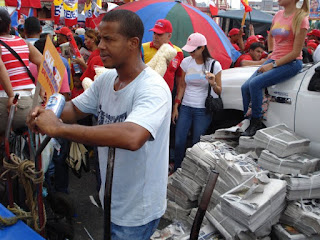 These are stacks of VEA newspaper for free, for anyone to get and that no one wanted, even for free.  I wonder if Alexis Corbiere walked by. 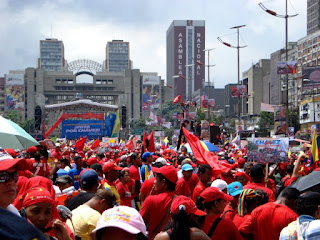 Still, as long as it did not rain, enough were waiting for their beloved leader.

The S.O  told me last night that he had never seen so much chaos, dirt and crap in downtown Caracas since el Caracazo which he also experienced live, laying under his window that he had covered with his mattress to block possible stray bullets.
Posted by Daniel at 9:10 PM