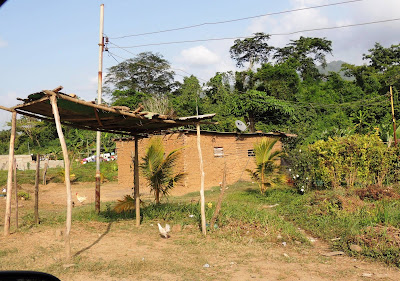 When I moved to San Felipe, Rafael Caldera had managed to do about half the the highway between San Felipe and Moron, with a bankrupt country. After 14 years of chavismo flush with cash, only a couple more exits have been added in what is perhaps the second most used road of Venezuela. Thus the last stretch between Moron and the highway is still about 12 Km of the two way original road, clogged with jalopy buses, trucks of all sorts carrying all the goods from Puerto Cabello to Barquisimeto and the Andes. And to enter the highway, you need to go through about half a mile of what is a dirt road, or rather of original country side lane turned into dirt by the big traffic.

The natives have gotten into the habit of selling crap to the passing truckers who of course stop to talk to the tightly to scantily clad girls selling them little cups of coffee from a thermos. Meanwhile you wait patiently for the transaction and small talk to be over.  But these points that develop rather fast each time a a new exit is incorporated in the highway, are also the nuclei of some new, shall we call it, settlement. 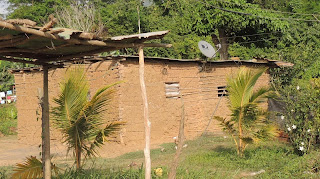 The one I picture here has caught my fancy. Finally using my powerful zoom I managed to take that picture the other day, ever so slightly blurred in the second image which is a cut out of the original one that opens this post (already quite reduced). After all, I could not stop my car, and I had to take the picture while climbing up the dirt road access to the highway.

The first shot is, of course, an "invasion" at the side of the road, which has not stopped the new owner to surround it with a fence. "Invasores" are born landowners, you know... Click to enlarge.

You may note on the bottom right the edge of my rear side window, a shaded stand that is probably put to some use on week ends, and a DIRECT TV SATELLITE DISH!!!!!  The house may be built on mud and straw but electricity is stolen from somewhere and they got a Direct TV decoder. Not for them to satisfy themselves with VTV and RNV that run for free in that area, the only thing the locals can get there.

The second pic shows more details of this native "mision vivienda", where the guys have even planted palm trees and some flowering bush.  If this were one of the few unique folksy expressions of Venezuela we could be amused. Unfortunately, after 14 years of chavismo and now almost 3 of Mision Vivienda, such scenes are closer to the norm than the exception.

What a beautiful revolution......

NOTE: if that last bit of highway had been done, not only it would save me at the very least 15 minutes from my trip to Caracas, but it would improve greatly the living conditions of the Moron inhabitants who still voted 70% for Maduro. How ironic!  Amen that sometimes crossing Moron can take 30 minutes or more.... depending what time of the day you attempt that crossing.  But see if I care, they deserve what they got, if you ask me.