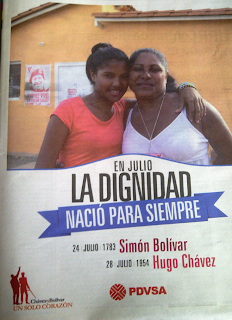 Having an arepa at my occasional hangout in San Felipe I was forced to read Ultimas Noticias as the last "national" paper still available. And I fell on this so telling regime propaganda that I could not resist to take a picture of the full page advertisement and deconstruct here for your pleasure. Click to enlarge.

Let's start by the obvious: PDVSA, the state oil company is paying for that advertisement to glorify Chavez by attaching it tot he memory of Simon Bolivar, on the week of the anniversary.  Of course, if Chavez was born late July it could nto be possibly for any other reason but to his link to Bolivar. Take that you other Leo babies! At any rate, PDVSA breaks the law but who cares at this point....

The message is simple: "In July dignity was born for ever". Of course, it means nothing, not even historically since Bolivar had nothing to do during the events of 1810 and 1811, the years when the idea of an independent Venezuela came to pass. But the message is elsewhere: it is the glorious army of Venezuela that made our independence, even if that is also historically false as Carabobo was won by "La Gran Colombia" forces in Venezuela. The point is to remind always that the army is top, very appropriate in our current corrupt military regime, where the new logo on the bottom left shows a red Bolivar with sword next to a brown shirted Chavez (the mistake in the scheme?). A Chavez which of seems more important than Bolivar if you ask me.  But they are a "single heart", who cares?

But this is not all in the post Chavez propaganda concept. Now that Capriles and the opposition hover at 50% it is important to rally and radicalize the bases. As such the two people in the picture are not brown skinned, they are African America outright. Reverse racism for you, sir!

The regime also preys on the weakest link, the single mother who finally is getting a home. This is what is supposedly depicted in the back, with posters of Chavez duly plastered with "mision vivienda", the massive building program that bankrupted the country but got Chavez reelected last year even though it is still so far in solving the housing problem. Thus we have the "dignification" of the single mother who for all practical purpose is now wed to the memory of Chavez, the only man that cared for her ever.

I am sure I can come up with yet more subliminal stuff but that is enough for now, you get the point. From Chavez ghost floating all above us to such crass propaganda, it is only going to get worse as the regime has nothing to show for.