I have thus being privileged to be a regular guest at VP, be it when Lopez launched his candidacy, or a few days after he gave up his ambition to favor the one of Capriles in 2012, already itching for the good fight against Chavez electoral machinery. A few months ago I was invited to tour their new headquarters, a flat on Centro Plaza, a good deal in a rather derelict building but aren't they all in Caracas these days..... I returned this week to make the promised report, coincidentally with the reply of Lopez to the fascist regime attack against him and Capriles with Machado. The true "triology of evil" that Maduro pretends to believe us these guys incarnate is in fact the trilogy of poverty, crime and scarcity. With the poster just produced today on the left for show.

The headquarters of Voluntad Popular are bristling with activity, full of energy. And not only because in one month we have elections, I already had that impression a few months ago when they had just moved in and there were half of the folks I saw today.

What welcomes you when waiting for your host to fetch you is an exhibition hall. A long hallway that can also be used for other purposes is decorated this month with a selection of political cartoons from Zapata, Rayma and Edo. It is called "La Ventana", the window, as a place where prosecuted folks are welcome to expose, and other to come and look over and see what the regime would like to disappear.

This is, in short, the tone of the visit: the rather young and dynamic team working for Voluntad Popular leaves no stone unturned, from mere electoral activities to more intellectual pursuits, even if in a hurry. But we are a country in a hurry, in a hurry to leave behind chavismo, so I can relate. Contemplation must be brief and purposeful.

There are rooms for everything, and all full of busy people. Below I will spare you the numerous meeting rooms and just show you where the action takes place (by the way, all rooms sparsely crowded with items, we sense that they want to have as little as possible on their desks least some repressive raid were to happen: whatever the Nazional Guard seizes, personal or not, is rarely returned even if you are 100% innocent).

Let's start with the call center, the key to any serious political organization.  There are about five rows as the one in the picture above. I did talk briefly with one of the guys in charge and they are happy with their work, having created in a few month a structure that allows them to avoid the use of expensive pollsters, at least on simple issues. I will not give you details since it is after all their weaponry, but I can tell you that their own "polling" matches rather well the few polls found on newspapers.  Of course, almost no one looked more than 30 years old.  In fact, I felt like an old troll in many rooms.....

Next is the room monitoring the media. Today since all media TV is either silenced or controlled by the government 5 TV sets are more than enough, and two were off....  There is way more work going on the computers where web pages, twitter and newspapers are closely monitored.

The electoral campaign is monitored from several rooms.  In the one below there are young designers trying to come up with all the necessary material.

In another there is support to the candidates with the chart pinning the picture of each candidate running for town hall. Limited means make them run more "traditional" material visual aids. There are about 40 running and they are optimistic about getting a significant representation. What is noteworthy here is to observe that on the map there are everywhere. True, maybe Zulia, Falcon and Bolivar are still rather empty, but everywhere else VP is running a guy, sometimes in big tickets like San Cristobal or Maturin. At any rate, in barely 4 years, VP has cultivated a growing nationwide presence, something that cannot be said for, say, UNT, and with caveats for PJ. 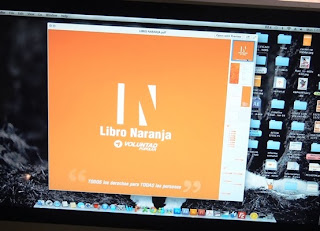 Last but not least, Voluntad Popular is finishing up its program and political concepts. The Orange book will be published soon and I saw the provisional cover.  Well, they are still working on the set up but the good thing is that after months and years of discussion across the country with the many grassroots groups they are finally getting there. It is not useless to remind folks that VP was the first political party since 1998 to hold an internal primary. Chavismo had some but they forgot about the whole thing as soon as they observed that some dared criticize Chavez proposals.  And the others are content in their pyramidal set up, if there is indeed a pyramid to be found for them.

To finish this post, let's talk about the press conference system of VP.  I receive on my mail regularly, at least once a week, a press communique of the weekly agenda. It is about the response of VP to a particular situation. It may be held in the press room of the headquarters or somewhere else, in particular if it is locally related to a given campaign. But the most salient feature if you ask me is that the official position of VP is not always announced by Leopoldo Lopez. In fact, there is great care taken to promote as many voices from VP as possible and many spokespeople are formed by giving these press conferences and holding the questions.  VP may be the creation of Leopoldo Lopez when he left his original associates but he has had the wisdom to make the party a real political group, a confluence of ideas and interests.

Today it was Lopez in charge of the conference.  Normal, he had been attacked vilely last week and there was a need to a direct reply.  I am not going to go into the details of that short and to the point briefing, which is by the way, always the case, short and to the point, whomever is in charge of directing the event at VP.  I did do a live tweet that you can check here if you wish. But live tweet is not the way to cover the energy of Lopez. And I must say, a certain anger I sensed by being branded a fascist when he has been repeatedly the victim of a regime that does not bother much anymore in democratic pretense.

The highlight of the presentation I would say was to once again ridicule Maduro. For him being so worried about Twitter removing 6000 fake accounts out of his 1 million plus followers is equivalent to a teenage girl tantrum, according to Lopez. Again, more evidence that Maduro is located between pusillanimous and ridiculous. The ever repeated leitmotiv that no matter what corruption is denounced, there is NEVER a big fish toppled by it was not forgotten.

The communication machinery, a concern from the very start by Lopez and Voluntad Popular, is smooth and quick to respond. When I was starting to put together this post I received already the summary of Lopez intervention and this video which is quite chilling if you understand Spanish. There is a clear expose of what is the real "evil trilogy" of Venezuela, shortages, corruption, violence, etc...

The web site of Voluntad Popular, a work always in progress in real web sites, is full of news, videos and how to join it. But you can also follow or visit  @VoluntadPopular to see pictures of all the constant activities of the group across Venezuela, some impressive considering the small locales they visit. They also report with pictures on the nasty stuff they find around. You can also follow @leopoldolopez who happens to have 100,000 more followers than @nicolasmaduro, interestingly. Real followers I would bet as Twitter does not seem in the need to clean up fake accounts with Lopez as it did with Maduro....

I am no political expert to judge how successful Voluntad Popular is, we will need to see if they get at least 15-20 town-halls next December. However after this visit I have a sense that whatever it is that VP is doing, it seems to be doing it right. And certainly the constant harassment the regime has against VP is proof that these young activists are having an effect.

To conclude, a picture I took during a short meeting I had with Lopez's team at the end of the visit, where he posed along the VN&V web page screen to greet readers of this blog.