Following the revolution from Podunk

I live in San Felipe, Yaracuy state, probably the most apathetic state of Venezuela outside Delta Amacuro. that is, there are protests everywhere in Venezuela but in San Felipe outside of a few dozens Wednesday, there is peace and quiet, the lone colleges working as if nothing. This has always been the case, no matter what party held the state house, no matter what fire burned in Caracas. In fact, the only time I saw a true stirring was the "cacerolazos" that followed the April 2013 election. For such a thing to happen in Yaracuy you needed truly a fed up spirit of high proportion. Which goes to tell you what a wasted chance Capriles had then, when he refused to do what it took to claim his prize. But I digress.


The point here is that I cannot participate, I can only watch, and as such this blog is of limited value unless you appreciate that someone filters for you the news, trying to separate the hysteria from the relevant.


Because the main problem in all of this is that the media erosion of the regime has been very successful and the only ways to get some verified information are through "some" newspapers, and an occasional snippet in the late news, suitably edulcorated. If it were for TV or radio alone you pretty much would not be aware of what is going on here in Venezuela these days. And through state media, at best that a tiny bunch of fascists are rioting from the safety of their own wealthy neighborhoods, a mere conspiracy directed as usual from some basement at the White House. 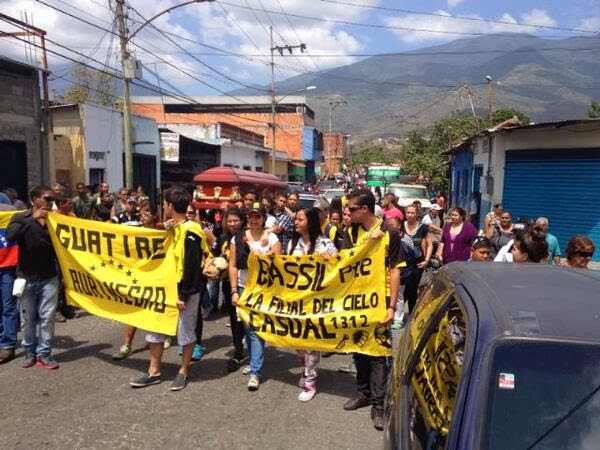 But no matter what recipes the Cuban masters are trying to effect through their Venezuelans agents, this is the XXI century and Twitter reigns sovereign in revolutions.  short of killing outright Internet, which also kills intra government response capacity to the crisis, there is no way you can hide the news. In fact, it is even worse as through Twitter you can get all sorts of people starting the wildest rumors, exaggerating the most mundane moments.  On the other hand, Twitter also allows you to participate from afar, From San Felipe if needed, in real time to the funeral of one of the fallen kids of last Wednesday.

So, what can I gather at this time?

The debate as to the merit of protesting or not is fading. People are fed up and in the streets even though "el pueblo" prefers, yet, to stand in line for food (at least this is the case in Yaracuy). Even Capriles is finding a little bit more of sympathy and realized that defending those in jail was of utmost important for his political future.

Leopoldo Lopez may, or may not be arrested. Even though the pictures of his supposed arrest warrant have circulated, nobody has seen it live. This of course does not stop repressive agents to try to scare the living daylights of people through his offices, and other home searches for that matter, that as far as I can tell do not come accompanied by a warrant... there is such a mess in the reactions of the regime that one does not know what to think. One could be even allowed to speculate that some inside the regime are trying to sponsor that mess to create yet more trouble for inside the regime......

Whatever Maduro has been threatening, protest went down but are going out. In fact there is perturbing change from past patters of protest: they are not in Caracas anymore, and the more violent are outside of Caracas!  After years of favoring Caracas over the province for supplies and services it seems that the regime is finally starting to get a bill.

Media coverage overseas has been whipped up. That the regime clumsily forced the closing of NTN24 emissions from Colombia has brought close to outlets like CNN that, indeed, in Venezuela there is censorship!  Can you believe that!!!!!  CÑN en español went as far as passing extensive excerpts of Maduro speeches so that they could not be criticized for passing equal time elsewhere. After 24 hours the regime decided to sent to CÑN finally two spokes people and it was the worse for them. It was painfully obvious that either Tareck El Assaimi, Aragua governor, or Jaua, foreign minister had EXACTLY the same old Cuban tape in their head and that they were unwilling or unable or both to leave their script. Which by itself killed their credibility. Whatever training they got with Maduro in Havana, they are far from being equal to their masters in manipulation.

Hard to tell. After the outburst of this week if the regime does only repression it risks a lot. True: obvious protest will start to fade some, but they will become more radical and soon we can start expecting violence from frustrated protesters. This is one way for civil wars to start and thus the question is: will the army accept to start shooting civilians to sustain such a corrupt and incompetent regime? Recent history is clear: generals that ordered shooting on the crowds found their ways to tribunal, even if it took a decade or two or three (Chile, Argentina, Serbia, Rwanda, etc.)

The regime has confessed that it knows that it is now in the minority: rumors that hot lines will be set so that chavista folks can complain and accuse people that harass them. But that will do little good because one thing has become terrifyingly obvious for all, here and abroad, is that the regime has an army of storm troopers that it does not control. And this is the real enemy of the army as these red shirted storm troopers all on motor bikes, are ready to strike whenever it is convenient FOR THEM, not for Maduro necessarily. In fact, Capriles main line is to demand that Maduro controls these people before anything else can be decided, discussed or what not.

My take?  It is quite possible that Maduro is living his last days in office, no matter what he does. His stay does not depend of the street protests: these only revealed his weakness and incompetence and front man status. His reaction to protests certainly did not make us feel that Maduro has power, that he is in charge. His survival is not in his hands or ours, but on X. X knows very well that a guy that has started so badly a 6 years term cannot carry it until the end.

Meanwhile, yours truly will try to make sense of the info he gets to relay it to you guys, the best! At least from the flood of hits in the past two days! Without even a major link to a major site to boost ratings, just you guys knowing me and trusting me and worrying for my country.

This picture is not faked.

And another one was modified to show a Nazional Guard having also one of those devices you put on your hand to turn your knuckles into steel (I am not showing that one).  Be aware when you follow events on twitter.  I only retweet what I think is sort of legit, considering the emotion of the moment perturbing occasionally the judgment of people that should know better. I am afraid to give you options to follow, not even politicians that are careful about what they retweet these days.

and of course newspapers tweets like EL Nacional or El Universal.

who retweet a lot of stuff. Then, use your criteria.

Email ThisBlogThis!Share to TwitterShare to FacebookShare to Pinterest
Labels: blogging as a way of life, maduro, political prosecution, student protests