Sliding to Venezuelan hell, with a video from hellish Nazional Guard, and one from a reader

The day started with CNN crew just arrived in Caracas being mugged by motor bikers carrying large weaponry. They lost their equipment. Me thinks that they were tracked by security since arrival and that their cameras were stolen so they could not transmit.

Disturbs kept all day long. And tonight apparently they got worse as many tweets report that "colectivos" undisturbed by the Nazional Guard or police are even breaking into homes. Reminder, colectivos = red shirted armed motor bikers, equivalent to your average fascist stormtrooper.

Lopez arraignment was postponed because of potential "troubles". A "mobile" tribunal has been set in his jail and I have a bad feeling. The more so that two of his principal associates at Voluntad Popular have received arrest warrants and it is rumored that at least the VP mayor of San Cristobal may be arrested soon. Clearly the regime is pondering the elimination of Voluntad Popular.

Maduro made a cadena tonight which ridiculed him internationally as CNN transmitted live the moment when he said that CNN was sabotaging him, full of lies about Venezuela. He also decided to ban protest marches in Caracas unless protesters pledged first submission, and for good measure praised "colectivos" which is one way to officially launch them into repression as probably he senses that the army is deciding that it went as far as it was willing to go.

I am leaving you with a video of a couple of Nazional guards that need no comment.

As a bonus I got this video from reader KM in Altamira as stormtroopers drive by shooting all around!!!

He also sent that pic on the amount of tear gas thrown in Altamira. 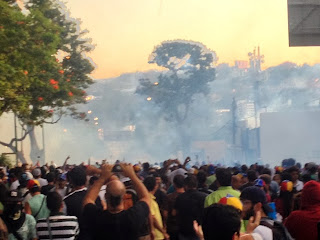