Irrelevant OAS stresses the bejesus out of Venezuela (and Cuba)

Chavez has spent 15 years, under the direction of Cuba who was excluded from the OAS by Venezuela's initiative, in finding ways to render the Organization of American States irrelevant. For this he supported the election of Insulza as its general secretary, a rare case of a president whose main task is to lower the institution it presides. To make sure there was no surprises for when the day to sustain his dictatorship come, Chavez started targeted programs to secure soft votes, that is, though generous money offerings to weak countries. Hence the ALBA and the archipelago of curious poverty that represent most of the anglo Caribbean.  Add to this countries like Argentina or Brazil who see in the OAS an additional tool to edge out the US influence and grab it for themselves. Thus you get a solid majority which today again acted, this time against Maria Corina Machado.  But it is a Pyrrhic victory, one that does not solve whatsoever Venezuela's image problem and actually worsens the image of the now severely discredited "leadership" of chavismo.

Although there is a gigantic amount of hand-wringing in Venezuela today as the opposition expected some miracle from the OAS, I see it as a rather positive moment. See, you need to understand first that the OAS, like the UN, has a glacial system of reaction.  You need a significant amount of blood and tears to start seeing some movement. These organizations are a club to prevent the "executive" power of countries to get at each other throats on any silly arguments. Once this is assured, other elements of countries, such as human rights, free parliaments, independent judicial are, well, negligible. Another way of stating this is that the OAS follows, does not lead, and as a follower the best it can do is be in the way of the aggressor, with the hope that this will be enough to cause its dismissal at some point. I meant be in the way, not stand in the way which is somehow more proactive.

Cuba has always smarted to be excluded from the OAS, one reason being that other dictatorships remained inside without much trouble. Thus the hatred by Fidel, the more so that now that Cuba is the lone dictatorship of the hemisphere. It is also becoming more of a pariah than ever even if  presidents love to run kiss Fidel's ass, if anything to silence a bit their crazy loony left (Venezuela is a somewhat special case of dictatorship in the works). And thus, through Chavez pile of cash he stole from the Venezuelan people, appeared all sorts of initiatives such as the ALBA, Petrocaribe, CELAC, etc, each more useless than the other except for one thing: it created a blackmailing system that slowly but surely ensured that the only hemispheric organization that could have any influence if it ever wanted to would be even more toothless than it was already.

The glory peak was the expulsion of Honduras on the pretense of a coup when it was absolutely clear that the judicial and legislative powers of the country had not been voided, and acted in fact in legitimate defense against the intention of coup that Zelaya had. Even the US fell into that trap, since the still novice Obama administration had not realized what meant 7 years of hemispheric neglect by Bush administration.

Once Honduras was more or less settled, we had Paraguay and there the OAS was not as easily manipulated. In fact, it was Mercosur and UNASUR that eventually did the deed, more reliable in that case than the OAS where after all countries like Canada dare to speak legalese whichever the circumstances are.

Which brings us to these last two weeks events.

Two weeks ago in a previous skirmish, only three countries had the courage to be on record as to express their concern over Venezuela. Canada, as expected, the USofA as implied and courageous Panama who paid the price by having its relationship with Venezuela broken up and a default on the debt of this one towards Panama. Like any fascisto-bully system, Venezuela attacked the weaker link of the three.

Instead of seeing this opportunity as a breather the Venezuelan regime decided to forge ahead and become even more repressive.  Panama, now the aggrieved party, decided to offer a speaking turn to a Venezuelan prominent leader and, well, the one available is Maria Corina Machado. Some other tagged along but I think it was a mistake: with proper protocols which are the norm there, whether we like it, only an elected representative or someone having suffered a universal affront can go there. If Geraldine, one of the repression victims, mother is allowed to speak then gazilions of mothers all across the Americas are going to go and want to speak. It may sound unfair and heartless but if we want to reach results we should keep it simple. But I digress.

Whatever the real intentions of Panama may have been, the regime lurched into the red cloth. Besides maneuvering like crazy to stop Maria Corina from speaking, they tried to disbar her from her representative seat before she left Venezuela. At the end of today they had succeeded in appearance at not letting her talk, but it is a small reprieve and the price the regime pays is heavy, not worth it in my opinion.

Before I detail the price paid let me remind the reader that the real and only reason the regime is doing what it does is that it is talking strictly to its radical base, to keep them motivated. That way it will be easier, in theory, to launch that radical base against the opposition as needed. That strategy is a totalitarian one, finely honed in Cuba from the Committees to defend Revolution to those destined to avenge the honor of the revolution and that, for example, tracked every step of Yoani Sanchez first grand tour, groups filled up with what we can charitably call either mercenaries or useful fanatical alienated idiots. what matters to Raul Castro or to Maduro tonight is that the chavismo brain washed lumpen think that the regime won by insulting Machado. Period.  They know that in Paris or Canberra sensible people are going to look in horror, but those are not going to man the barricades of Caracas any time soon.

So, what did the regime lost internationally? First, the ridiculous and protracted battle to have the discussion "private" without the media attending simply established that Machado words would be damaging to the regime. Right there it did not matter anymore whether Machado would speak, she had won the argument before uttering her first word. Even a portion of the local lumpen is going to wonder why, if the regime is so right, it cannot defend itself at the OAS?

The other thing is that the break up of the OAS started, and it started badly enough that already the Venezuelan ambassador suggested that Venezuela may reconsider its association with the OAS. That is, Venezuela has recognized that in the long run the OAS battle of opinion is going to be lost and that Venezuela should get ready to fall back on CELAC and UNASUR. But can it do so?

The first vote, two weeks ago, was 3 against Venezuela. Today it went up to 11 and showed cruelly the divide between serious countries and those that have no scruples, no coherence.  there is two Americas and revealing that is a mistake. Polarization at home is one thing and may work for a while, but polarization in international stages raise too many alarms and eventually any specter of war will erase difference between countries so they can all gang up on the trouble maker.  Look at Crimea today: Putin may seem the victor but let's talk about that in, say, a year.

The 11 countries besides Panama, Canada and the US are:
- Mexico and Peru which are serious country that hate to be dragged in trouble but who like a certain clarity in proceedings
- Chile who shows that Bachelet is not willing to break up her majority in her first week in office, and that Chile is also a serious country used to public formalities.
- Honduras and Guatemala who besides not liking much Maduro also are in solidarity with Panama, amen of Costa Rica who is probably the most democratic country of the continent today.
- Paraguay who has real grudges against Maduro
- Colombia though there was an hesitation it seems, due to its misguided effort to think peace could be reached with a narco terrorist organization......

Of those that voted for Venezuela's position I am only surprised to see Trinidad in the lot. I do understand that Venezuela is a difficult neighbor, but... All the other country are more or less bought by Venezuela, without exception. A special crap medal for Brazil who behaves less and less like a country aspiring to a permanent seat in the UN security council. I mean, if Brazil cannot impose some sense in its neighborhood how do you expect them to do elsewhere?  Even the Chinese are infinitely more behaved and productive than Brazilians, if you ask me.

If I go into the detail it is to show you that an automatic support of the CELAC for Maduro is to be ruled out now that Mexico and Peru have started to express concerns publicly (Trinidad, Barbados and Dominican Republic will also join them if things get out of hand in Venezuela). UNASUR also, if we add Colombia and Chile and I dare to predict eventually Uruguay if things get worse in Venezuela. The only hopeless countries are the ALBA ones of Ecuador and Bolivia, and together with Argentina and Brazil, well, they cannot make UNASUR by themselves.

In short, what I am trying to say is that far from shoring up support Venezuela today has seen its potential weakness as ONLY the bribed country are still paying lip service.  As tonight reports of violence and injured keep piling up from across the country we can wonder how long does the regime can postpone the consequences? Venezuela is not an island concentration camp, you know.....

I am leaving you with a great picture of today's real winner in front of the OAS and the video she pretended to show at the OAS. 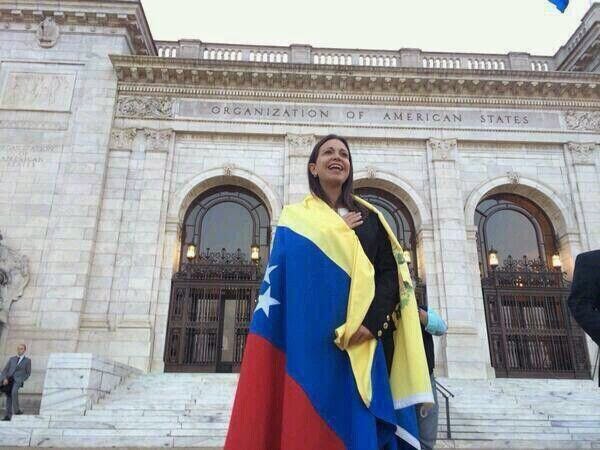