I know, this is almost two days late but this was such a personal experience that I can indulge this post.

It all started fairly normal. walking down El Cafetal and Chuao until arriving at the Caracas small airport, La Carlota. Still, things felt different, quite a stream of people even though already a lot of people had been going that way. Also my group was a tad late for the official opening of our scheduled starting point (24 total in Caracas). We were in the tail end. 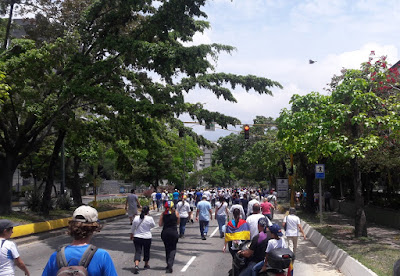 Our trail merged with the one coming from Petare and Altamira, on the central highway at La Carlota. Words failed me when I saw the huge crowds and the huge flow. There is just a panoramic video from the Altamira exchange all the way to the Las Mercedes exchange.


A better take of the view of the three level highway exchange, all full of people going towards downtown Caracas.  I have been to a lot of marches folks, but this one, THIS ONE was something else. I do not think it is possible to do any bigger in Caracas (and probably anywhere else for that matter....).  I was stunned.

For good measure I am putting below what was behind my back when I took the picture above. 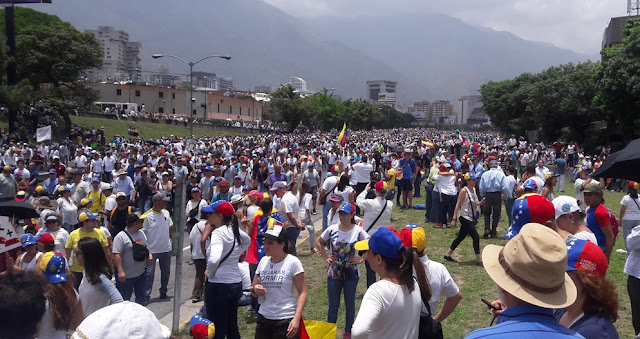 And so we went ahead.  At some point we had the Nazional-Guard/Police chopper flying above us. I am adding that video because it shows how reckless repressors are becoming. In addition of taunting us as the crowd jeers, they fly low above us, monitoring any detail and filming. In a way it is good that the regime counts how hated they have become, but it has another objective as they are learning how to throw gas bombs from such helicopters in violation of any international code. It starts like that and soon enough it is real bombs and sarin as in Syria.


This next video is the flow at the point where the highway splits in two decks. Which is about the time we decided to stop advancing. Already the counter flow was becoming noticeable, and in the distance I noticed banners that did not seem to advance any more. Little did we know! See previous post to see what was awaiting us.


This is where we headed back. We had to leave through the Chacaito exit of the highway and go around a small street tightly packed with people until we could make our way to Las Mercedes, Rio de Janeiro avenue because coming back through the highway would have been too difficult. In the picture below you can appreciate yourself the volume of the return flow going East. I have attended marches that would have left deliriously happy their organizers with such a flow. 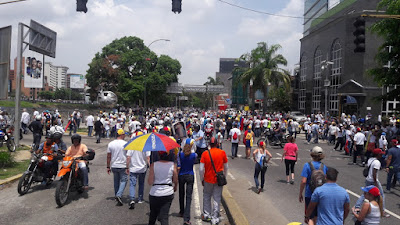 We had already been walking for over two hours under the sun and we decided to stop and grab a bite before the one hour walk back home. This is where it went all to hell. For the ones still on the highway I mean, for us not as bad but quite a trial for 4 people that were never gassed before by tear gas, or in th middle of a battle zone.

As we were getting our seats in the back one of us noticed people running fast. We understood what was coming but we were inside, probably as safe as we could get. But on occasion I would go tot he front of the joint to peek through the window as you can see from the picture below, where the marchers in the highway have been replaced by the repression. It is to be noted that in the back of the store our eyes and throat itched a little but to take that picture, with the doors fo the eatery closed, we could hardly breeze. In short the ventilation of the joint could not handle the amount of gas drifting over Las Mercedes! 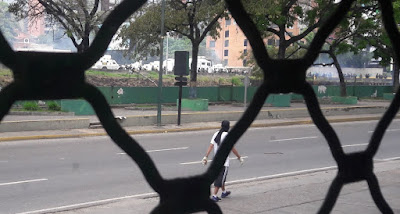 On the Rio avenue suddenly empty we could see on occasion cops with guards flying by. And you know that they can exert their vindicte on any one they feel like, the more so if that person is alone or a small group.

But the store owner were anxious to close and throw us to the street.  Apparently a week ago they had received a tear grenade on their roof and they had to put children in the cold room to protect them. So the dozen of so person still left, in addition of the cooks and managers had to leave the restaurant. Fortunately one of the refugees had a bottle of Maalox so we could plaster our faces as the only possible help once outside.

Where to go? On the right there were spontaneous barricades from protesters that sure enough would be bombed soon. On the left meant going back towards Chacaito and direct repression, but a left turn soon inside Las Mercedes.

We went through Las Mercedes, barricades, runs with police driving back, and even hiding inside another restaurant for 10 minutes. We sort of zigzagged avoiding the streets from I suspected cops and guards could come from behind to take down the barricades. The only moment where I truly got scared was reaching the barricade at El Tolon mall. There they had already put up a "guaya", a metal rope at the height of a motor bike. You know that this barricade, with plenty of people by the way, would be a target for heavy repression.  I had my group hurry up to a side street and did not even think of taking a picture....  Interestingly along the way we picked up people that were sort of hiding in corners, in particular women, eager to join people so as not to walk alone all the way to Chuao. We started the four os us, got up to about ten until we merged with another group of about ten, everybody watching over their shoulders.

Eventually we made it to Chuao and looking back there was still battle going on as you can appreciate yourself from that smoke in the distance. 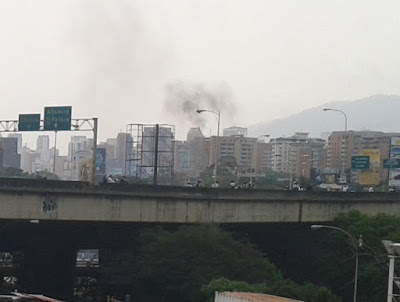 And this is yours truly eye arriving home before I had the chance to wash my face.

The experience I related above is certainly not tragic but it is significant because it is the experience of the average protesters. Some did not see anything, some were thrown in the Guaire river. As such that it is average is telling that in no civilized country the bulk of its citizens should be subjected to such indignity.

The thing that perturbs me the most here is that it started like that in the Arab Spring of Syria and it ended up as you all know.  I am afraid that the druze that our vice president is, Tareck El Aissami, indicted of terrorism and drug traffic, will have no problem turning Venezuela into the land of his ancestors.

Email ThisBlogThis!Share to TwitterShare to FacebookShare to Pinterest
Labels: april 2017, blogging as a way of life, repression