What we have experienced today in Caracas is terror. Even yours truly got gassed, not much but truly. But I am not the one who suffered the most, by far. So I will start this entry with pictures that show clearly the terror the regime deliberately forced upon us, at an enormous risk of lives lost. Four pictures to say it all. 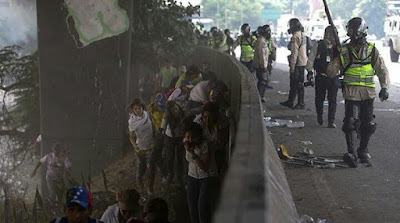 This picture truly represents terror. On the right what are goons of the worst kind. On the left kids, teenagers 20 something, girls, hiding for dear life away from these goons, trying not to fall in the river. Look at the picture, look at the details!!!

Unfortunately some of them had to go down and wade through one of the most contaminated streams of the world, the rive Guaire that crosses Caracas, an open air sewer. I let you imagine the consequences... 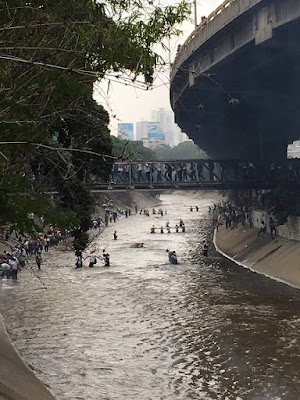 How did that happen? The repression deliberately set a trap that could have caused hundreds of death.

The main highway through Caracas was taken by the march. That highway, Autopista Francisco Fajardo, AFF, splits at the level of Chacaito in an upper road West-East and a lower road East-West. Since the march was so huge (in a post later) the two decks were densely packed. Then the regime decided to strike. In the first picture you will see the upper deck and how packed it was. Had the wind gone East West, or had there being no breeze, the suffocation would have created a stampede and people would have been trampled upon, or maybe even jumped! I suppose the regime bet on the wind so that the smell would not be so bad to avoid a stampede. But the risk was enormous, ENORMOUS! 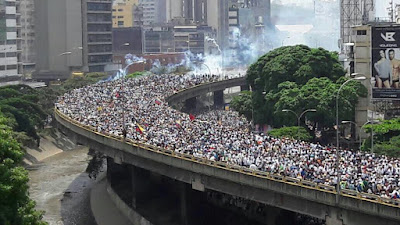 The next picture is the view West East where you can appreciate more what I just wrote. You can also see the amount of tear/pepper gas used and that the breeze was not that strong. You can also see that the lower deck battle was strong and that the crush forced people to jump into the sewer. The crossing shown above is further down river and not seen in this picture in particular, or at least it had not started yet as people may not have been aware yet of what was happening. 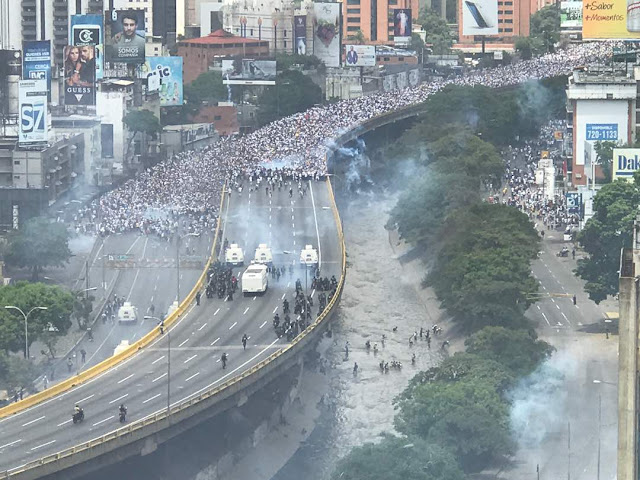 Now you understand better the terror in the first picture above.

All of these are worthy of Crime Against Humanity pursuits...

About ten minutes before the gassing started I was where the cell phone add was (white, black sash), at the end of the curve. That is where we decided to go back as it was becoming impossible to go further and people were already going back. Within minutes the police was bombing the area and and a few minutes after we had to take refuge in the street on the right in an eatery that shall remain nameless because they have already been in trouble.
Posted by Daniel at 2:14 AM

Email ThisBlogThis!Share to TwitterShare to FacebookShare to Pinterest
Labels: april 2017, crime against humanity, terrorism, Venezuelan narco-dictatorship of the XXI century