This tweet of mine below as you can see does not reproduce anymore a previous tweet from the regime company Vetelca. In that tweet we could see a whole bunch of employees cheering Maduro as if he were the rain god that allowed for the Guri to fill up again and forcing the gates that control excess flow to reopen after many years.

I have already explored extensively the electrical crisis of Venezuela which is due part ideology part incompetence to which you apply graft. A more detailed post on the subject is here. 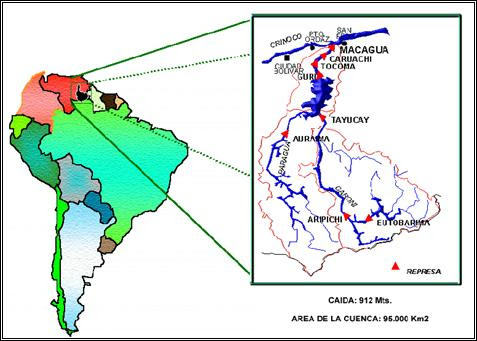 The point here is that the Caroni dam system is designed to produce up to 80 gigawats, about Venezuelan needs, or the needs of many a country. But Chavez and his idiotic ministers Giordani and Rodriguez decided that they were unnecessary, an ecological disaster (to be proven). So even the studies were stopped for anything above Guri except, perhaps, for the Tayucay site.

Now, from the pic on the left you can see that the Guri damn is the central piece of the system. It controls the flow downstream and thus insures a year long stable production. The guri production itself varies according the season but that could be improved by building at least 4 more dams upstream which combined could add an extra 30 giga while maxim up Guri.

In short, good management of the existing dam is enough to produce all of Venezuelan needs for a year, the climatic up and downs compensated through thermoelectric plants which is no problem in oil rich Venezuela.

But all of this you sort of knew already.  The point here is that the management is so lousy that the obsession of the regime to fill up the Guri as if all depended on the water level has caused the current flood (and who knows what structural damage to the walls of the dams and their turbines).  See, Guri does not need to be filled up right away as soon as rainy season starts. Just for a quick search I could dig a couple of climate/flow studies that could serve as a reasonable basis for predictions on the water flow. So, if July rains indicate that you may fill up Guri earlier than expected you must then release some extra water on the side so that you will not have to release all at once and flood all downstream.

But no, Maduro or some asshole decided that the Guri had to be full at all times and the ideologized workers (the professional ones have either left or pushed aside to low key positions) worked on filling up the dam. And suddenly they had to flood Puerto Ordaz.

With climate change, without knowing it, the pre Chavez democracy had come up with a plan that could make Venezuela a 100% clean energy country with little ecological damage (the river fauna is very limited becasue of the nature of the water there).  But chavismo wrecked it, decided to be more climate insensitive and eventually left us with floods and not enough electricity.

That is communism for you.  Only politics and constitutional assembly, no economics nor light nor medicine at home.