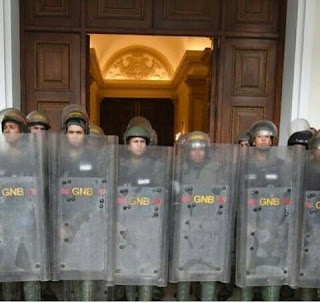 
The constituent is above all

That they are overcrowded sitting on party pliable and uncomfortable chairs did not stop the constituents to declare themselves as of today of being above any of the existing powers and institutions. For our own good, apparently. (1)

Note that the complete results are not yet out and these creeps are already ruling as if nothing, fraud declarations remaining investigated, of course. 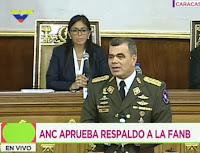 To make sure that we know who is in charge truly (besides Cuba, of course) we even had the visit of the defense minister in full drag, as a guest of honor. That is right, a constituent assembly of the people starts by bowing to a general.

Today was thus quite a democratic display. And right on time as the Lima reunion was taking place, to make sure to confort them in their soon to come decisions.

Many countries were invited to a meeting outside of any international organization to discuss what to do about Venezuela. That is, the countries that are decided to do something about it, without the bothers that sell out countries do to stop any measure against the dictatorship (2). They met today at Lima.  Of those who met, 12 decided to sign a declaration which is as strong as you will ever see any. And apparently Jamaica was about to add its name though they did not. Nobody understands why Uruguay did not go along since last week end they agreed to kick out Venezuela from Mercosur. At any rate, the 12 signatories have agreed to further meetings as sanctions are implemented and that anyone wanting to join the principled positions could so so.

The WSJ has a summary in English, though if you can read Spanish I urge you to read the short and drastic declaration.  The important points to be drawn from it are:


In short, Venezuela is declared a pariah state.

Meanwhile in Caracas the dictatorship could only gather the ALBA (Cuba and Caracas client states) and emit a long and ridiculous declaration that even included the wall.  Maybe feel good, but totally out of step with the moment, which shows you that even the sophisticated Cuban diplomacy is losing its footing.


It is to be noted that the US was not, on purpose, in Lima and so it cannot be accused of remote directing the whole thing. As a matter of fact, if you read the Lima declaration you will be stricken by its novelty and creativity. Venezuela is truly seen as a continental problem and all agree that it is best that the US sanctions are taken separately from other sanctions so that the Cuban propaganda cannot use tired old cliches.

We'll see.  Meanwhile the image of Maduro has gone down quite a lot today. As a matter of fact he even asked the ALBA to speak on his behalf tot he Lima group....

1) On that note the high court keeps condemning opposition mayors without trials, removing them form office and jailing them for 15 months under the pretense that they did not keep order in their districts even though it is public knowledge that the dictatorship has taken away any means that they could have used to maintain public order. It is simply put a purge following a kangaroo court. Some are already in jail, some have chosen exile. About half of the opposition mayors elected last time have been thus removed. And going.

2) As of this post the words regime and dictatorship are interchangeable when referring to Venezuela. This is not a democracy anymore, there are no valid elections anymore, there is no rule of law anymore.  As for Maduro, he will not be referred anymore as president Maduro, unless irony is required. From now on Maduro is the dictator of Venezuela.

As for the leftist that keep supporting the dictatorship, like Corbyn, Melanchon, Iglesias, IU, and other, I will come with wonderful epithets to underline their falsehood, hypocrisy and absolute lack of true democratic instincts.  Readers suggestions welcome.