In Venezuela elections have lost any meaning.

The regime now manufactures the votes it needs to win whatever it needs to win.  And now, courtesy of hyperinflation, it can also print money at will to throw at people. That whatever it throws at them is losing half its value within a month is a mere detail.  But the beauty of it all is that people that receive those crumbs need also to be duly registered with address on voting lists. Thus, in case printing both votes and money is not enough, you can also scare them into voting for you by visiting them on election day, say, at noon with a dry knock at the door and a "you have not voted yet; come on, let's go; we are taking you there".  "Carnet de la Patria" is indeed a wonderful tool of control. Who knew it?

So today we are going to examine all what you can get from Carnet de La Patria by election time. 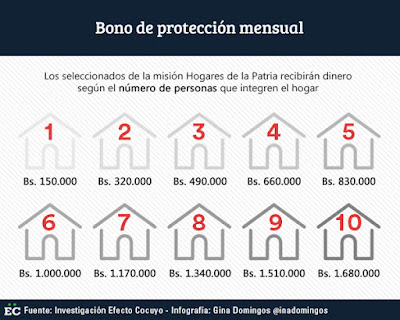 That chart is what we can call the basic allowance according to the size of the registered family at a given home. Note that most cash grants are directed more at homes than individual. You may think it is more social but you'd be wrong. It is to make it clear to that household that if any one would dare to vote for the opposition they would ALL lose the benefits, meager as they are already. But heck, with 50% monthly inflation and no jobs anywhere, why take chances by voting against Maduro?

But that is not all. With the following conditions you can also add to that cash grant (not freely redeemable by the way, but that is another story).

- if you are a physically challenged person you get 700.00

- for epiphany supposedly each one registered got 500.000

- and today, it was announced that for the coming Mardi Gras festivities they will also get 700.000

I hope this is all right because there are sort of nuances according to who is reporting. And besides, Maduro also announced the percentage of those already granted, which implies that not all have received cash and may not be receiving the cash, depending, you know.

But I am game, let's make the estimate on how much a household will receive in February.  Let's take a 5 person household.

After mardi gras an election will have come and the girl would have given birth and thus income will take a nose dive. But that is another story...

Unfortunately my grocery bill on January 25, for the week that followed, not including bread or meat, was 839.205. For a single week, me alone. Without including rent, water, electricity, telephone, etc...

You do the math.