From official terror to article 350 - 3) the country chavismo wants

If chavismo is divided it remains nevertheless that they all share a common vision of the country: we will never be out of office; we will create an opposition we like; we will share only a few things with that likeable opposition; we will erase it as needed and start anew; 90% of power and money at the very least will always be for us.  Then again, when you look at the pictures from this week end military ceremony you do realize that "Caracas, we have a problem". 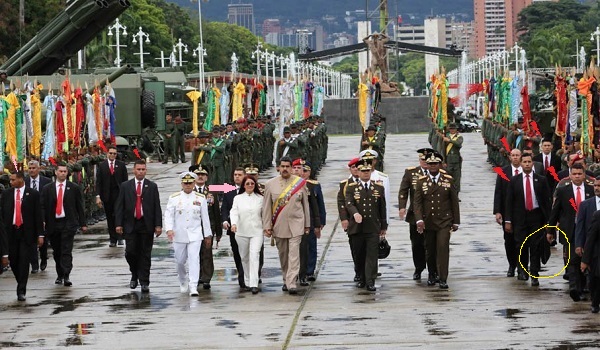 In here I have pointed out a few details on that picture. Maduro went to an army base, isolated from the general public as the crowd was selected (long gone are those Chavez ceremonies at the Carabobo battle field on June 24 when "el pueblo" was welcome with open arms).


First, look at the number of bodyguards. Just on that pic we can count at least 9 (red lightning). Let me see whether I get this right: Maduro claims that the army is devoted to him and the revolution and in a major military base, in a major military holiday he feels compelled to bring all these bodyguards? OK, let's move on.

Second, one of the bodyguards has a strange wallet circled in yellow. The nuclear code it ain't not. I inquired with a relative that used to be long ago in the army. That rectangular satchel can be open quickly and becomes a series of connected shields behind which the carrier (or Maduro in this case) can protect himself from bullets.  Trust issues anyone?

Third. Maduro carries around his wife, Cilia Flores, pink arrow.  She has no official function in the government. She has no function in the army. She does not even belong, that I know, to the National Assembly defense committee (and, anyway, she would not be the only one from that committee entitled to attend). Nobody else carries their wife/spouse to such a ceremony. What gives? Why is she most of the time next to Maduro in public appearances, and always in major ones?  Is she being groomed to become his successor? At this point in our tumultuous political climate I cannot see any other logical thought. This is becoming for real a Nicolae/Elena duo.

It is when you see such picture, betraying such a lack of trust, such a need to display what in reality does not exist that you understand better why the regime has convened a constituent assembly: the only not too bloody way to get rid of whomever you do not like or do not trust.  And of course, since a constitutional assembly cannot be trusted anyway, let see how the regime packed it to make sure that a majority will be held by the camarilla in office.

I am not going into details. Quickly. First, there should have been a referendum on whether "el pueblo" wanted a new constitution. There was not. Also that referendum should have been deciding how the assembly would be elected if a different method from the current system to elect the National Assembly was chosen. It was not. Moving on.

Once the constitutional assembly election is imposed, its electoral system represents a severe regression in human rights as the principle of "one man one vote" is dismissed. Just an example: a vote in some districts represent a dozen of votes in another district, preferably one where the opposition should win. A sort of apartheid vote where the majority of the country will get a minority of the elected. And if that were not enough, about 40% of the constitutional assembly will be elected through a corporatist system where groups of people, according to their occupation, get to vote again (and many who do not qualify for these will not have that vote).  The list of these groups is established arbitrarily by the regime. Like me you find out that you have been registered as X when in fact you should be in Y. But see, the X are the rump corporatist seats allocated to the opposition whereas the Y is where chavismo is pretty sure to get an ample majority since the rolls are linked to social programs that they control.

The whole set up is of a very fascist nature, as under Mussolini or Franco, where only males registered in certain groups could vote.

And what does that assembly wants to achieve?  Legality, human rights and the like not being, obviously, the prime objective.

At first it seemed that what the regime truly wanted was a way to get rid of the current National Assembly so that the constituent assembly could be the organism that would sign on new international loans that the current Assembly refuses to sign unless they have at least supervision right. Supervision is what this regime is toxically allergic too.

But as the "campaign" progresses it has become clear that the constitutional assembly will have other unholy objectives.

First there will be a purge of all that chavismo dislikes. This will start with the National Assembly, of course. But since then new targets have emerged. For example the Nation's Prosecutor, Luisa Ortega, has already been publicly named as one of the first officials to be fired. We can expect a lot more purges, in the best stalinist minus execution mode, from sitting mayors and governors to the army. The army in particular I suspect will have a reorganization that will reduce dramatically the numbers of generals, currently superior to the total numbers of generals in NATO (depending on how you count, but certainly more than the US who is at war right now). Since the army is corrupt the purge will have two intentions: eliminating a lot of corrupt simply because there is not enough money for bribes anymore; eliminating generals of dubious allegiance, those that are not willing to repress as ordered.

The second objective will be to create, let's not be afraid of words, a communist state. Soviets/comunas/consejos comunales will become the administrative structure. They are systems under social control where votes, if any, are with raised hands when possible.  Private property will probably be recognized but expropriation will be made easier through figures of "social interest". Also these "comunas" will be the ones supervising the good use of private property and thus decide if not ownership, at least what should be made with them.

Third, a legal way to restrict rights. We already saw how the principle of "one man one vote" will be killed by the mere election of that assembly. But we can be assured that new constitutional restrictions on media and Internet will be enacted.  Also, we can be assured that if the regime party may not become a one party state, the executive power will be even more reinforced as separation of powers will be struck from the constitution. As long as the regime can manage to elect the executive power through corporative voting, it will not matter much what the rest of the constitution states.

Let's add a fourth intent: change the legal/penal system so as to make lesser crimes people like Cabello or El Aissami are already accused of, and ban extradition under any term.  That is, in a hypothetical future you could only jail Cabello by changing again the constitution.

So that is the vision of the chavismo state, which should, up to a point, decrease the need for bodyguards for Maduro et all.  In case you still do not get the point there is that video of Maduro today, I think, where he says clearly that if he cannot achieve the revolution's goals through the vote, he will do so through the arms.

There you have it 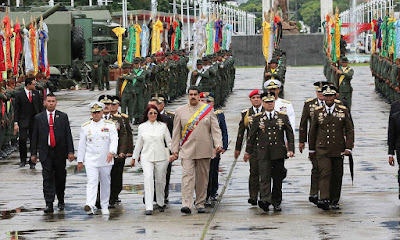 There you can appreciate the restoration of the national men's attire that Maduro wants to force on us. Except that that outfit is not for women but Cilia is now wearing such.

Also look at the cheap banners held by the soldiers. There is a certain cheap Nuremberg tawdriness to the whole thing, don't you think?

By the way, the fatness of Maduro is exaggerated by him wearing under some bullet proof shit.