A way out for Venezuela: the post Duque election effect

The time has come to discuss what could be done about the Venezuelan narko kleptokracy. And the election of Ivan Duque in Colombia today does affect the possible outcomes.


The good news is that Ivan Duque and Uribismo won (strongly supported by ex president Pastrana). The bad news is that Duque did not reach the 20% margin over Petro he needed to have a poweful mandate. He can pretty much do what he wants about Venezuela as Petro is irremediably flawed on this regard. But Duque will have a distracting opposition that will try to sabotage every thing, and already in campaign for 2022, as implied by Petro in his speech tonight.

The thing now is that 1)  Colombia has put in office for 4 years an openly declared adversary of the Maduro dictatorship 2) the flow of refugees from Venezuela can only increase now with all the political implications this can have and 3) Maria Corina Machado is the chosen. Not that it may be the wisest one since she may be articulate and all but she has failed at establishing a solid movement, even if it were small.  At any rate the regime is already floating plans to arrest her on charges of treason. That will help.....

Unfortunately for the MUD/Frente/Amplio/Falcon opposition Machado has several advantages against them, regardless of her flaws. She is the only one with a clear message. She has held it against all odds. She was punished inside the opposition for calling up their shady games. One should not be surprised that for many foreign leaders she has become the only Venezuelan with credibility (1). And Duque made his choice clear during his campaign, an unusual act in any campaign to have such a display of foreign policy.

Does Colombia has a choice? No. If the fear factor of Venezuela played a role in the Colombia election it was minor. Otherwise Petro would not have reached his score. In Colombia the fear to return to FARC wars was stronger than the fear of Maduro. They may get both anyway since they did not support massively enough Duque. But in the end, when conflict time comes, and it will come, Petro circumstantial electoral alliance will break on that matter.  He is just a nuisance on the way to conflict and will burn on it like a moth (2).

I mention conflict with all seriousness. Colombia cannot support millions of Venezuelan refugees, no matter how much money the World gives to them. It is made worse as we can be certain that drug traffic uses that flow of refugees to operate, plant agents. Colombia already has complained that in areas with many refugees Venezuelan style crime is felt.  If the regime refuses to relent, refuses to loosen up at the very least its economic grip to slow down refugees flow, a conflict will be inevitable.

How will this conflict take place? Needless to say that Colombian forces will not want to reach Caracas even if the road were to be opened wide. Needless to say that if we come to war the Colombian army will win hands down since the Venezuelan army has become a mere assortment of fat generals with starving and deserting soldiers. Risking your life to save fat Maduro? I doubt it. At least Hitler and Fidel always took care to look thin and hungry.

No, the conflict will start by an escalation of international pressure. Santos may already oblige before leaving office by sending the OAS report on crimes against the humanity to The Hague international court, thus officially activating investigation (Panama and Chile already promised to do so). That  report lists already several names, Maduro and his close surrounding, but it has the promise of dozens more to be added.  Will those ones wait to be added and allow themselves to be sacrificed to save Maduro and Diosdado whose crimes cannot be forgiven?

From then on many incidents will take place at the borders. We can have the FARC crisscrossing it. We can have horrendous human tragedies (3).  It can quickly escalate to a short and precise war whose objective would be to take only a couple of thousand square miles of Venezuelan territory, just for "security reasons".  After that either the Maduro regime falls, or those territories can be used to stock Venezuelan refugees there and let the UN pay for their upkeep.

You do not believe me?  You have a better idea? Just wait and see.

As a footnote, the Venezuelan opposition has a problem. Since Colombia will become the major player in the crisis, what will they do about the blessing of Maria Corina Machado? Will they finally come up with some credible strategy that will associate Machado (and Ledezma)?  Voluntad Popular of Lopez is probably ready to support Machado as she has been the most vocal supporter of Lopez. I will bring up this picture from February 2014, the day Leopoldo surrendered to the regime, Machado next to him with fear in her eyes at the threats by guards and police. Fear but courage which is what defines true courage, to do it in spite of your fear. 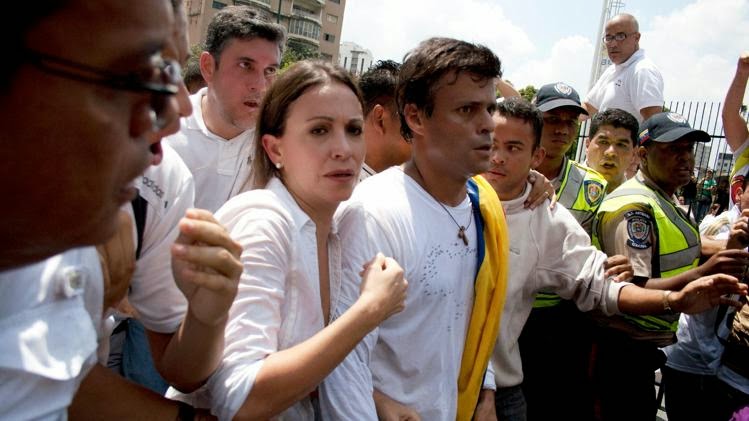 1) Lopez also has credibility but he is in jail, his party is near extinction at the hands of the regime and the discreet acquiescence of some inside the opposition. Borges has credibility also but lost it at home through opposition twitterzuela hysteria. As such he is ineffective. Ramos Allup has become like the Sphinx of Thebes.  Capriles has lost his own credibility, at home of outside.  There is no one else that currently could even pretend.

2) Keep in mind that Pastrana and Uribe led the successful NO to the referendum on the FARC "peace" agreement, against all odds.  To every one surprise outside Colombia except for us in Venezuela.  This allowed Santos dare to flout the popular will. That is the origin of the Duque victory today. That is what revived uribismo today. But the YES had a lot of votes in that referendum and those went to Petro, null, or Duque if their fear of a Venezuelan like collapse was bigger than the one of a FARC doing as it pleased under a Petro administration.  Keep that in mind as you contemplate the results in Colombia today, the victory of Duque has deep roots, the votes of Petro may be much weaker than what many think.

3) There are two major examples in history of partial invasion to deal with refugee crisis. One was Indira Gandhi making war on Pakistan to get the independence of Bangladesh, as India was overwhelmed with a wave of civil war refugees. And recently we had Erdogan taking a small chuck or Syria on the excuse of its Kurdish presence, but that will surely see the moving there of many Syrian refugee camps in Turkey.