A compendium of chavismo neo-whatever

At Tal Cual today it almost seems that they did a special collector's issue, a keepsake for future generations as to how chavismo has advanced in brain washing, personality cults, and a sad repeat of all the tares already observed in previous authoritarian regimes. Since it is such a rich issue I have lifted a few articles of their subscriber's only section and put them in my Documents on Venezuela page. All in Spanish because it is too long to translate it all, but I will try to give you the gist of the different articles.

The editorial in the cover 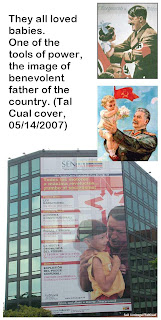 Tal Cual is amazed at the magnitude that the personality cult on Chavez is reaching. Literally when we consider the picture on the left which is a poster that covers all the height of the SENIAT (IRS) building in Chacao (it is the illustration of the front page, I just changed the legend which contained part of the editorial. Click to enlarge). Now the great beloved leader has every day less and less to envy to some of his colleagues such as Castro or Kimmy boy in kimchee land. So Teodoro Petkoff reminds us that even though Chavez is apparently not in the league of the other posters brought back for the occasion from the history books, he also reminds us that all and everyone of these attempts at glorification of the great leaders ended up with torn down statues.

Tal Cual reminds us that personality cult, be it with babies or not, is always an additional strong tool of control, one part of the "big Brother is watching you" even if it is static posters. And that one of the direct effects of such cult is to actually lower the human condition of those who happily partake in it.

Also Tal Cual, at the end of the editorial, reminds the SENIAT that they have moved so their inspectors do not get lost on the way since as it is usual when Tal Cual criticizes the SENIAT, a tax audit follows closely. But in Venezuela we all know that the SENIAT is just now one of the repressive arms of the state as anyone not in communion with the nascent cults is curiously audited over and over. Could anyone imagine a gigantic poster of any US president covering the IRS office? (1)

The mini editorial written by "Simon Boccanegra" is a jewel. It takes directly to task ex Vice President Jose Vicente Rangel for undertaking on his own a crusade for the personal security of Venezuelans. Tal Cual reminds JVR that he was in office for a total of 8 years, most of them as defense minister and vice president, jobs closely linked with the citizens ability to sleep tight at night. How come if under his watch things got so bad he has now the nerve to make it his crusade? What did he do for the best part of these 8 years?

And cruelly it underlines the immense discredit that JVR suffers today: "quien no lo conozca que lo compre" whoever does not know about it [him, pun of sorts] may buy it.

Chavismo has established recently the Centro Internacional Miranda which is supposed to be a foundation/think tank where a few people have been hired to develop some meat for the XXI century socialism ideological bare bones. From the list of members I am underwhelmed. The direction is of course safely controlled by political appointees least some originality were to emerge from the state funded academic think tank (yes, state funded, of course with all the implications of having politicians such as El Troudi or Navarro at the helm). And the list of "cooperants" to give them a name, includes Eva Golinger and Chesa Boudin. The same Eva Golinger by the way who wrote to me to complain that I pointed out that Venzuelanalysis had started putting Chavez and babies years ago in its articles. But this blog is often ahead of the times and it has been several years that Venezuelanalysis is linked with that "Chavez kissing babies" comment on the right red side...

Well, one of the prized possessions of that CIM team is Juan Carlos Monedero, a Spaniard leftist that has found a good way to "finance his research" if we use academic standards. He has been popping out in the news lately to the point that Tal Cual Alejandro Botia asked him for a detailed interview. Beyond the impressive ability that Monedero has to dodge the point blank questions, insistently repeated under different ways by Botia, we come out of that interview realizing that Monedero might not have an idea yet of what he is talking about or working on. That is, the Socialism of the XXI still does not exist as a concept, and the only thing we know about it is what it pretends not to be. I have rarely read such a poor way to intellectually define a new theory than by starting strictly on the "I am not" aspects of it. A worthwhile read if your Spanish is good enough!

Let's say that I am not holding my breath for brilliant publications from the CIM. However I will say one thing for Monedero: as an apologist of Chavez he is more effective than Julia Buxton!

And to finish I could not pass on the Ibsen Martinez reflexion on the books that Chavez supposedly has read. Not that there are not other articles in that Tal Cual such as a riveting expose by Guerra on why Chavez will have to nationalize the Venezuelan banking system as he runs out of cash. Or the way an Argentina newspaper narrates the ridicule to which Castro and Chavez subjected themselves on the Ethanol reversal.

But Ibsen's piece has two virtues of note, it reflects yet another way of the personality cult (what the leader reads is as good as the Gospel) and whether the beloved reader actually understands what he reads. In fact I think that even Barbara Walters had commented on how many books Chavez has read (but memory might fail me on that one though I am sure that someone of notoriety has commented on that in the US). The incident of Chomsky mention by Chavez at the UN last year is in everybody's mind, by the way.

The mystery here is how come Chavez has the time to read at all. There have been consistent rumors that in fact at Miraflores there is a special cell that reads books for Chavez and serves him Cliff's notes versions of such books. And he does have a prodigious memory for silly details. In a way I think it is fine that a president does that, at least if well done it promotes reading and education of the populace. But unfortunately if "summaries" are the case with Chavez then it is not well done. Or Chavez does not understand what he reads. Your pick. At any rate after a book is recommended by Chavez there comes all sorts of cute stories afterwards of his people pretending that they rushed to read the book to be able to understand life, the universe and everything else.

Ibsen gives many examples of which I have selected a very telling one. Apparently he heard some chavista student or something tell his friend that Victor Hugo's Les Miserables narrated the life in Paris of the 1871 French Commune, very fashionable these days in chavista circles such as the CIM which tries to give an ideological and historical basis to the the Communal Council under creation. Unfortunately the book was published in 1862 and narrates the barricades of previous French revolutions; and does not take any political side by the way.

1) let me take this opportunity to remind you that the Venezuelan Army has instructed its soldiers to salute their officers with "patria, socialismo o muerte" which in addition of being grammatically incorrect reminds us of the famous sieg heil of other days. Miguel even has the picture of the order. And I can point out readers to my post about Nuremberg and chavismo ceremonies. Some might think that we make these things up but I will remind them that truth sometime is stranger than fiction.